The coastal settlements of Tynemouth, North Shields and South Shields lie on the north and south bank of the estuary of the River Tyne. North Shields is slightly further down from Tynemouth and connected to its namesake on the other side by a passenger ferry. The towns’ name derives from the Middle English word ‘schele’ meaning ‘temporary sheds or huts used by fishermen’.

A settlement was first recorded here in 1225 when the Prior of Tynemouth decided to build wooden quays here to land fish to send up to feed the priory. The priory, seen here from the south side of the estuary, also owned local collieries and used the port to send out coal.

As the population increased business men and merchants built houses on the plateau above the old, overcrowded, insanitary dwellings along the river. The businesses on which the town depended like fishing, ship building and marine engineering continued to be based down here. Sadly, none remain. In 1870 the Fish Quay was built near the fish market to provide shelter for the moored boats. This whole area has been transformed with the building of luxury apartments and streets alive with the buzz of classy fish restaurants and bars. Fishermen still unload their catch at the Quay. 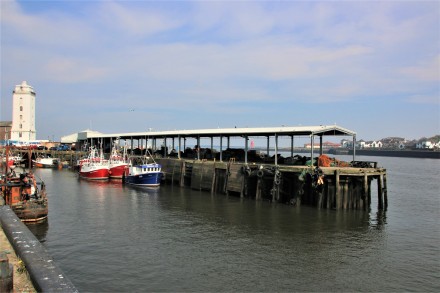 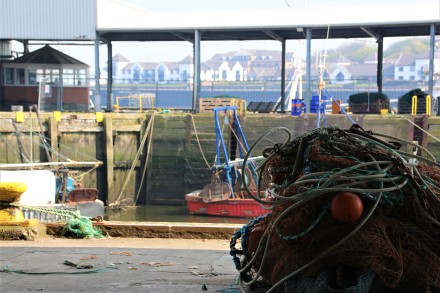 South Shields is on the south side of the mouth of the Tyne and faces the North Sea. Its coastal and riverside walks provide excellent views over the waters to Tynemouth and to North Shields. The town was founded in 1245 and grew as a fishing port. Over the centuries other industries in the town included ship building, fishing, coal mining and glass manufacturing. These provided employment, attracting workers from the countryside, and created wealth in the town. Sadly, none of these industries remain in present times. Today the local economy revolves around port-related activities, ship repair work, manufacturing and, increasingly, tourism.

New multi-million projects along the beach have created a wide promenade and a network of walkways, Ocean Beach Pleasure Park with fairground rides and arcades and a wide, family-friendly beach with golden sands and easy, safe bathing, all of which look across the estuary to the ruins of Tynemouth Priory & Castle on the far side.

North and South Tyne Piers were between 1854 and 1895. The original plan was for each pier to curve out from below the priory to the north and from the end of the beach to the south, creating a set of callipers to protect shipping as vessels entered and left the River Tyne.
The North Pier, hidden at the back, was supposed to match its southern partner in shape. But the central part was breached on several occasions after a series of heavy storms. A new pier with a straighter line replaced it and in 1909 a lighthouse was built at the sea end.

The South Pier had no such issues. It was never breached and maintained its original shape and structure. It is 1.5km in length and curves out to sea. It also has a lighthouse at the far end. It is accessible from South Shields’ seafront and is open to the public if the weather is set fair.
A third lighthouse stands slightly further upstream on a site between North Shields and South Shields to warn shipping about sand banks in the river. The Herd Groyne lighthouse, painted red, has an upper part of corrugated iron and wood which sits on 12 cylindrical steel legs.