A path runs along the open clifftop from South Shields, south to the mouth of the River Wear at Roker. Old mining communities, now presenting more of a 20th century face, stand back from the edge where the occasional cliff stack grows, like a giant crystal, out of the soft, sandy beaches below, attracting nesting birds in huge colonies. 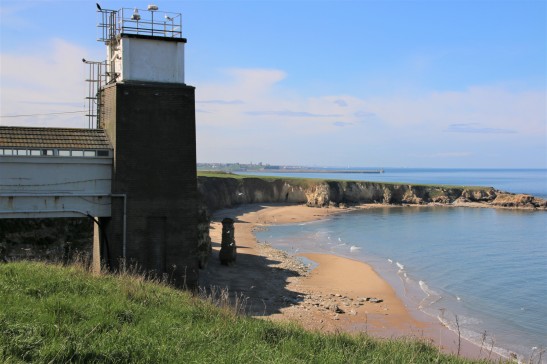 The Leas is a stretch of open cliffs, covered in grass and wild flowers, which runs south along the top of the cliff. Limestone cliff formations dominate the coast here and isolated stacks provide refuge for seabirds. Marsden Grotto Public House, seen here, is just that, an eating place, set within a cave in the cliff face. It can be reached by a lift from the cliff top or by the zigzagging stairs down the side. In 1782 a lead miner called Jack ’Blaster’ Bates came to work in the limestone quarries at Marsden blasted a rent-free home from one of the caves in the cliff for his family. Over the years he developed it into an inn which still operates today.

The main road runs parallel to, but is set well back, from the coast along here, connecting the old mining communities that existed here. Westoe Colliery, now part of South Shields, was one of the last deep-under-sea pits of the region. It closed in 1993.

Marsden Colliery operated close to the lighthouse, built by Souter in 1871 and the first to be powered by electricity. When the colliery closed in 1968 the whole village was demolished and its residents moved to Whitburn. The open cliff top around the lighthouse is designated as a recreational area for mine workers and their families. The lighthouse was decommissioned in 1988 and is now run as a visitors’ centre by the National Trust.

The cliffs here overlook the wide crescent of Seaburn’s wide, flat, sandy beaches. A promenade runs alongside the beach and there are hotels, shops and plenty of places to eat on the other side of the road that runs alongside it. In the 1960/70’s the artist LS Lowry was a frequent visitor to the town to the extent that a road was named after him.

The White Lighthouse was originally built in 1856 on Sunderland’s South Pier. In 1983 it was dismantled to allow for harbour improvements, and then re-erected in Roker Cliff Park, between Seaburn and Roker.

Sunderland grew as a port, trading coal and salt. Ships began to be built on the river in the 14th century. By the 19th century, the port of Sunderland had absorbed local settlements, owing to the growing economic importance of the shipbuilding docks. Following the decline of the city’s traditional industries in the late 20th century, the area grew into a commercial centre for the automotive industry, science and technology and the service sector. Roker is a tourist area at the southern end of Seaburn’s golden sands and an affluent part of Sunderland. 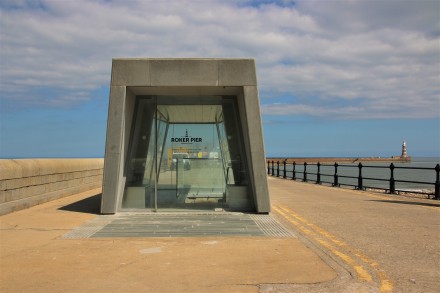 The New North Pier, Roker Pier, built between 1885 & 1903, is 600m of exposed stonework leading out to the lighthouse at the end. A huge crane, its gas engines supplied by pipes running in a specially designed tunnel, was used to manoeuvre the stones into place. This tunnel was used by the keeper to reach the lighthouse in rough weather and can still be used today in the event of anyone becoming trapped on the pier for any reason.