San Sebastian is in the Basque country of  northern Spain, close to the French border. What a delightful place it is. The sun was shining brightly on the Sunday afternoon as we got off the bus that bought us from Bilbao airport. So the first stop had to be the wonderfully soft sands of what must be the best town beach in the whole of Spain, and that is saying something.

The beach stretches around the bay in an almost perfect crescent, pulled between the two rocky hills which anchor its ends where the sea first broke through to the softer rock. Tall elegant apartment blocks and a wide promenade look down to the sands through a intricately patterned wrought iron balistrade. Families and friends lie out on a mosaic of towels absorbing the warm autumn rays and enjoying the cool waters of the Bay of Biscay. 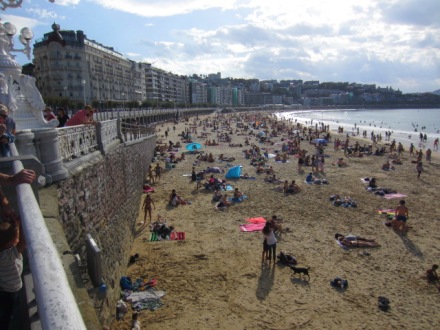 The Old Town is a grid of narrow streets which hide San Sebastian’s signature hot spots – eateries. Flash Michelin Star restaurants play neighbours to so many pintxos bars of all shapes and ages which provide a feasting experience for locals and visitors alike. Pintxos is the Basque word for tapas. They are a great way to sample some of the most fantastic cuisines in the world, cheaply and risk-free. Portions are small, prices low, and service quick. Many bars have food on the bar-top that you can either help yourself to or point to purchase.

And the best thing? It is all washed down with red Rioja at 1.85 Euros a glass. Heaven.

Days are spent window shopping in the elegant shopping streets or finding something more local in some of the smaller alleys of the old town. It was reassuring to still find specialist shops flourishing like chandellors or hat shops or the ‘bedtime shop’ which sold pjamas, dressing gowns, bras and hats (hmmmm).  Old churches can still be found in numbers around the backstreets which lead to the harbour.

Squares and open spaces provide a relief from the heat of the summer and the storms of the winter and provide the town with a feeling of culture and elegance. Constitution Square is one example.

All in all, San Sebastian has a feel of class and elegence and grace, both its buildings, its boulevards, its atmosphere and the dress and attire of its inhabitants, particularly the older generation. There are things going on which contribute to this cosmipolitan feel – theatre, music, street art. I loved it.

Georgia is a beautiful country, especially at this time of year in the early stages of autumn.

Much of it lies in the Caucasus Mountains. Rivers have cut down through the rock to create deep valleys, the sides and ridges covered in mixed deciduous woodland and pine forest. 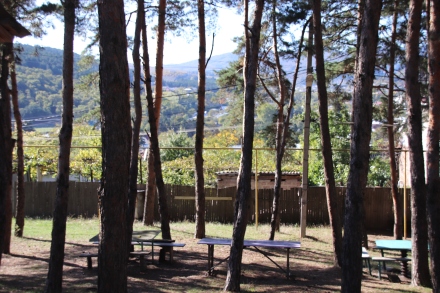 These valleys control all the major road routes through Georgia and dictate where people live and work. 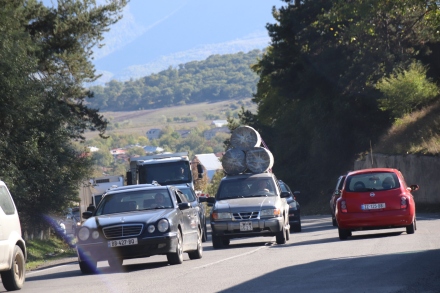 At the same time the country’s recent history has a huge impact on the landscape. 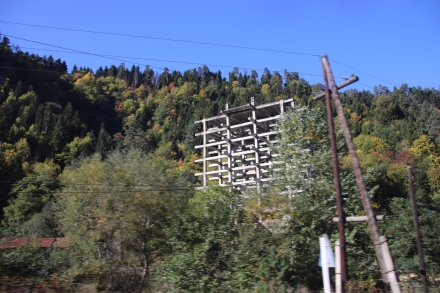 You can be driving in late, shadowy sunshine, winding a colourful road surrounded by the oranges and yellows and greens of woods and forests and orchards and then you come into a large town. When the Soviet Union collapsed the local economies collapsed at the same time. Suddenly local industry could not get parts and raw materials and more distant markets in Russia disappeared. So now factories lie rusting and the people who worked in them have to scratch a living by selling produce from the road side like honey

or sweet bread or homemade liquor or making home-deliveries on a simple trolley. Maybe the birth of Amazon! 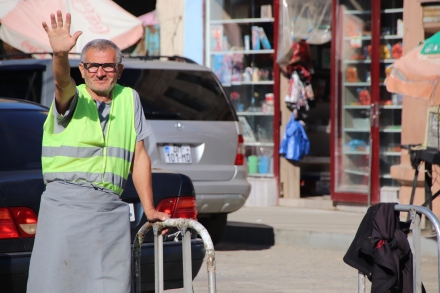 Homes in the countryside tend to be single-storey and quite basic, set amongst mature fruit trees against a backdrop of turning autumn.

In the towns ghastly, tired, cement-built apartment blocks, constructed in the 50s in the Soviet era, house the people and the workforce. These sentinels stand out above the bungalows and detached homes of the more affluent suburbs.

Tbilisi is an attractive, modern, cosmopolitan city. There is bit of a buzz about the place with the beat of music clubs mixing it with the clatter of glitzy restaurants and local eateries and bars. The centre is dotted with historic sites and churches alongside modern government buildings constructed with glass to signify the new climate of openness.

Outside the capital life is hard. Little has changed since the Soviet era. But progress is being made. New building is taking place in the mountains to develop the infant ski industry. A new motorway is being constructed to the west of Tbilisi. Tourism may well be the way forward for many. 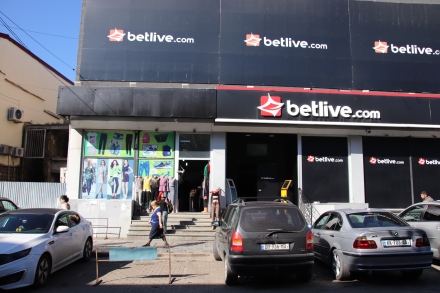 Georgia is good place to visit, particularly Tbilisi.. Hotels are good, food is hearty and tasty, eating out is cheap, beer and wine are excellent and inexpensive. People are unused to foreign visitors and can appear suspicious, but they do crack into smiles and laughter if approached and engaged. 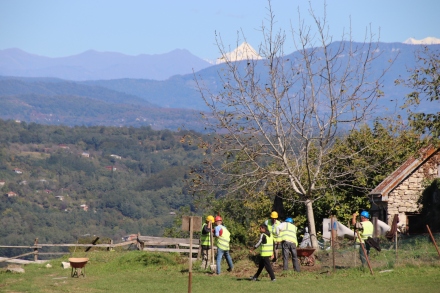 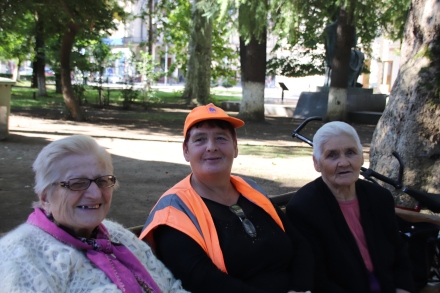 The air is clean, the scenery magnificent and it is what it says on the tin – the place where east meets west, where Asia meets Europe. Well worth a visit.

I have left the best until last and that is Georgia’s ancient wine industry. In Tbilisi every street has a wine shop where you can sample wine, taste wine, buy wine. Outside the capital there are signs everywhere for vineyards, wine cellars, wine producers, wine routes.

The wine region of Kakheti lies in the fertile lands in the eastern part of Georgia. 70% of Georgia’s vines are grown here.

It was 6000 BC when the first grapes were found in Georgia which is why they proudly boast to be the cradle of wine. They produce 520 varieties of wine in the country. Alexander Chavchavadze bought European methods of wine production to Georgia in the early 19th century. The cellar at his summer pad still sells wines and chacha using local grapes.

We stop for lunch with a local family who have their own vineyard and produce their own wine – dry red and dry white, the latter more like amber. 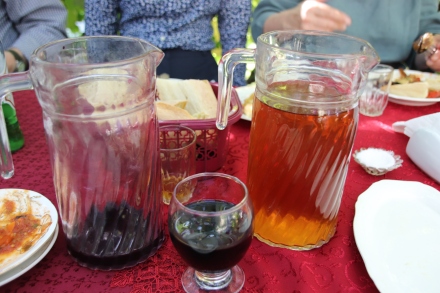 The white is…..well, a bit iffy for my palette. The red is great from the start. And it was the start of a great meal, in the sunshine, in the shade of fruit-laden vines. Great fresh food and copious amounts of the family’s very drinkable plonk.

A bit of methodology for you….. The grapes in the fields are harvested. The harvest is thrown through the hatch of the 150 year old wine cellar and into the trough where feet trample and squish the grapes. The liquid drains into one of the three underground vats, which, once filled, is sealed. 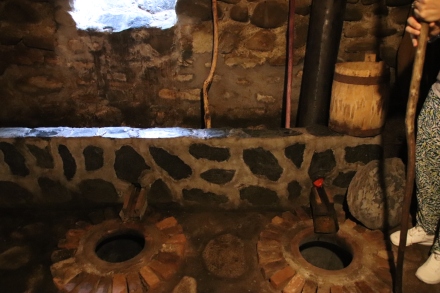 Fermentation takes place. When ready the wine is removed with the help of a clay jug and allowed to settle in large jars before being bottled.

A further step is to create chacha. The grape leftovers are mushed together and placed into large clay pots where fermentation continues. The vessels are sealed. After 6 months or so it is filtered and decanted into smaller vessels. Repeat filtration creates a stronger spirit called chacha, rated 50%+ on the Richter scale of spirits.

What a great lunch. I don’t know what happened to the rest of the day.

A drive back to Tbilisi today, by way of Mtskheta, the former capital of Georgia. 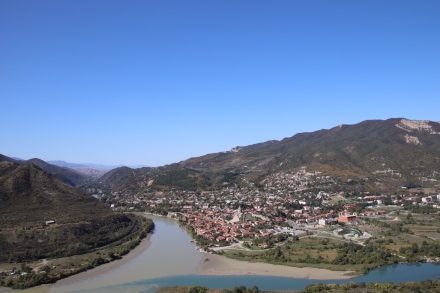 The 11th century Sveti-Tskhoveli Cathedral is the largest functioning cathedral in Georgia. 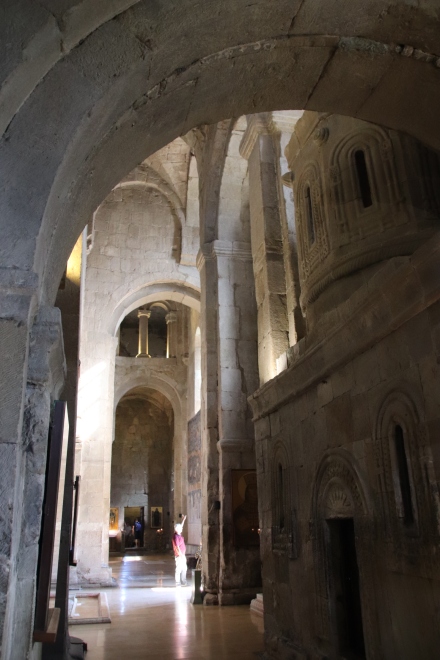 Jvari church is perched high up on a hill overlooking the valley. It is the spot where St. Nino set up her cross in the 4th century which converted the town from paganism to Christianity.

To contrast with this ancient place I attach some images from the drive back into Tblisi. Modern history is just as poignant.

These three days spent out of Tbilisi give a real insight into everyday life in Georgia. Wherever the destination it requires a long drive along one of the country’s few major roads. The number of motorways can be counted on one hand. I must share this image of the gents’ toilet in one service station. 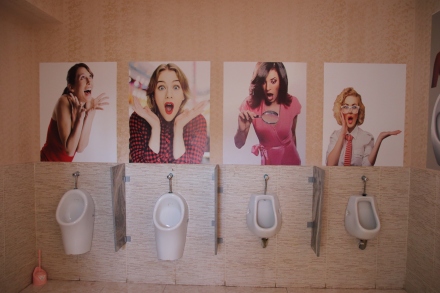 The mountain regions present their own transport problems besides the normal steep, winding roads and that is convoys of those huge 18 wheeled lorries that slave it up the inclines and then race it down the other side. These single lane mountain highways are not built for overtaking, particularly by the trucks. But they take ownership of the road. They are just as forceful as the cars, thundering past other transport and forcing their way in before the approaching calamity just misses their front wing. Sometimes there are three of these juggernauts belting along in opposite directs but ending up side by side with inches between each of them. 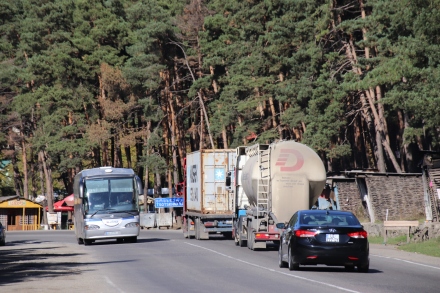 Uplistsikhe is a large pre-Chrjstian cave town, now with a more recent church built at the top. Ancient temples and theatres can still be seen and water was collected from the river by way of an underground tunnel. 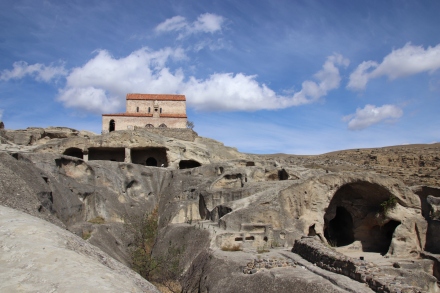 Gori is the birthplace of Joseph Stalin. There, that is Gori. Not a lot else to say.

Kutaisi is a pleasant city with a wonderful fountain at its centre. A large park provides shade and opportunities to wander, relax and appreciate statues of national figures. It has an Opera House and a theatre…. and a Macdonalds!. 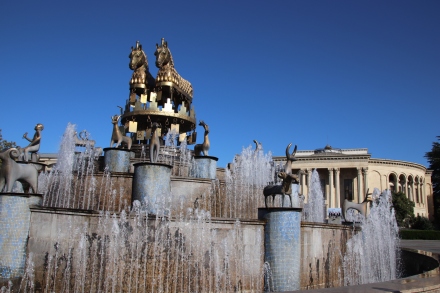 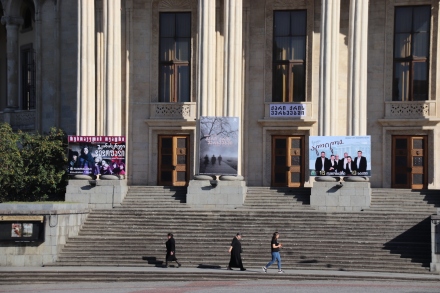 Blocks of traditional buildings stand next to modern constructions. I got caught up with the locals. I found my two brothers amongst the taxi drivers. 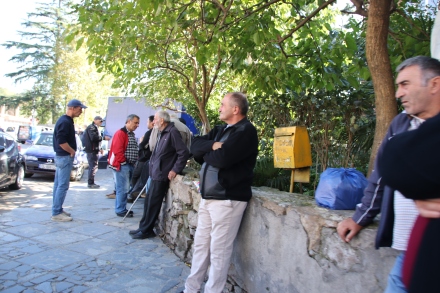 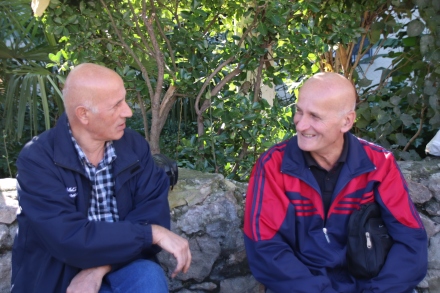 This lovely lady worked in the cafe under the tree.

These guys were simply passing the time of day. So chilled….and pleased to be asked to have their photo taken.

The 11th century Bagrati Cathedral stands in a prominent position above the river. It suffers the indignation of being one of those few sites to have its UNECO World Heritage in Danger status withdrawn due to a very unsympathetic, modern renovation at the side. 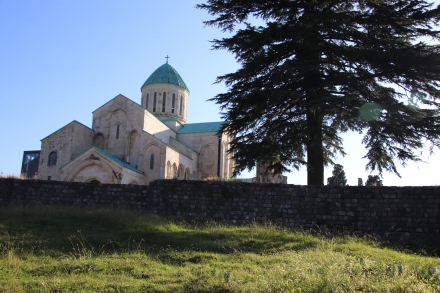 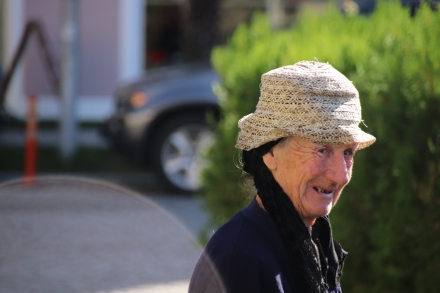 The frescoes within the buildings that form the Academy & Monastry, founded in the 12th century by King David the Builder zf Gelati, are magnificent. The main church and the smaller chapels are covered in images from the life and death of Christ, dating from the 16th century. Awesome. 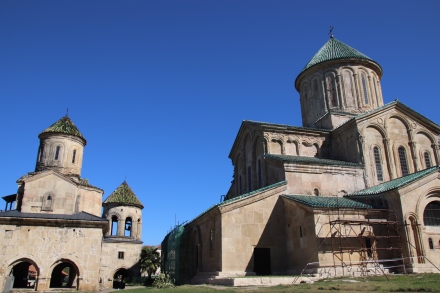 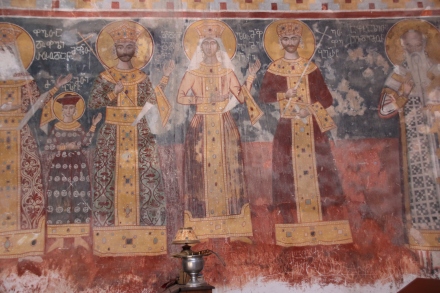 I should at this point share with you the fact that Georgia and England both share their same patron saint, as will as the same flag – a red cross on a white background. Needless to say, the Georgians got there first. English crusaders heard about this legendary figure in the Holy Land and decided to adopt him as their own – the dragon representing the infidel.