Alnmouth is a lovely village of colourful cottages and old houses, best known for its wide expanse of golden, sandy beaches. There is a good variety of restaurants, pubs, tea shops, gift shops and a golf course. It used to be an important grain port until, in 1806, a huge storm altered the course of the river and its estuary where it entered the sea, silting up the harbour. It is easy to get to by local bus and train, being on the East Coast Mainline.

Amble is a town at the mouth of the River Coquet. There are numerous cafes, bars, restaurants and fish & chip shops to satisfy the appetite of its many visitors. Its history stems from the sea and it still has a fishing industry, with marine repairs also carried out focussing on yachts and pleasure craft. 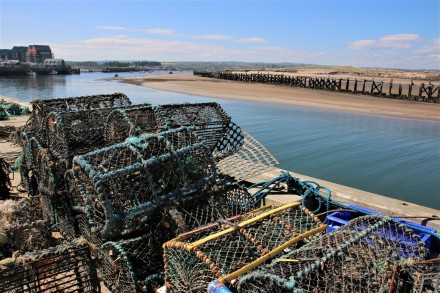 A mile up the River Coquet is Warkworth Castle, where the powerful Percy family lived from the 14th century. 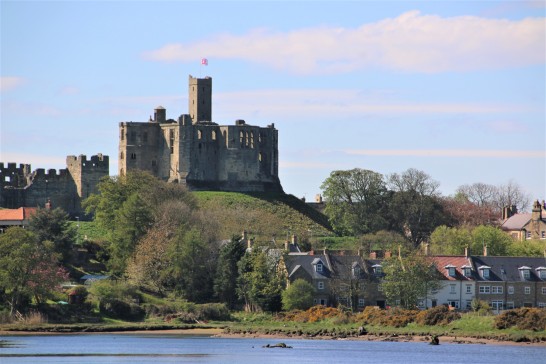 Here you can act as king or queen for the day or be rowed across the river by the boatmen of Warkworth Hermitage. Only accessible by boat, this 14th century chapel is hewn from the rock face. It was here that monks prayed for the souls of the Dukes of Northumberland. Today you might catch sight of seals and otters swimming up to this curious cave-like chapel.

Two holiday caravan parks line the main road through the village, facing the open sea. The gentle slope of the beach is backed by extensive sand dunes. There is an ice-cream shop and a café down on the shore. 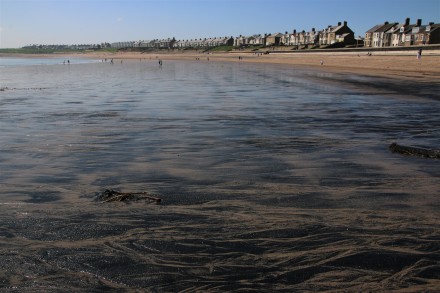 Lining a vast sandy beach, with black streaks of coal that have risen to the surface in tendrils of darkness reaching out to sea, is a wide promenade atop a massive sea wall. The town bunkers down behind it. Half a million tonnes of sand from Skegness was used to rebuild the beach in 2007, along with the construction of a breakwater, decorated with a 12.5m high sculpture by Sean Henry called The Couple.

Newbiggin was an important port in the Middle Ages, only Hull and London shipped more grain. As a result of its wealth, the town was granted a weekly market and a yearly fair by Henry III. It was a coal mining town and had a small fishing industry. By the 19th century visitors started arriving, attracted to its sandy beaches, and hotels, guesthouses and bathing facilities grew up to serve these holidaymakers. The Maritime Centre stands at the end of the promenade and features exhibits on local history and the town’s maritime heritage. It also tells the story of the development of the telegraph. In 1868 a telegraph cable was laid from Cable House in Newbiggin to Jutland in Denmark. In the nearby village of Woodhorn is the Colliery Museum which uses the original pit buildings to depict the lives of mine workers.