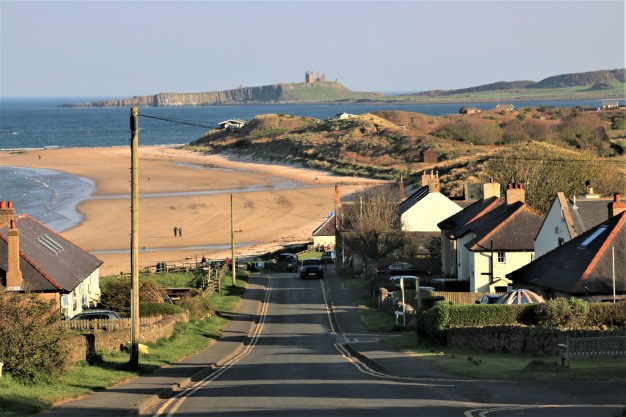 From the top of the hill on the approach to the village of Low Newton, there is a good view of the entire settlement nestling on the beach and dunes. In the past the locals made a living from fishing. The village pub at the bottom provides a clue.  An open-ended square of cream-washed cottages, in the centre of which The Ship Inn, originally known as the Smack Inn, looks directly out onto the glorious sandy beach. In the far distance the ruins of Dunstanburgh Castle can be seen on the other side of Embleton Bay. 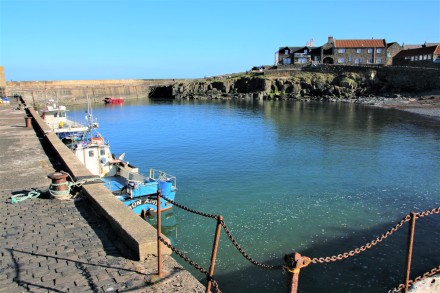 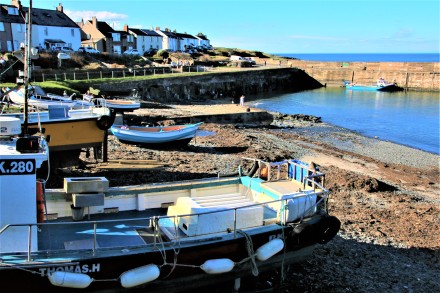 A smoking shed and a ring of houses overlook Craster’s small harbour. The village and estate have been owned by the Craster family since 1272. The harbour, built in 1904, was used to load local stone into boats which was then shipped to London and used as kerb stones. Today it is used by leisure boats and a few cobles that fish for lobster and crab. Craster is famous for producing kippers (cured herring) which are served in several establishments in the village which is a good base for coastal walking and fishing

From Craster it is a magnificent walk northwards along the cliffs for a mile or so to the stark ruins of Dunstanburgh Castle.

These stand on a rocky promontory sticking out into the North Sea. Work began on the castle in 1313. Thomas, Earl of Lancaster, who had inherited the Barony of Embleton, was a man of immense power and great wealth. He chose this spot as the place to build the ultimate status symbol of the day. Thomas commissioned the renowned mason, Master Elias, to build his castle. To impress folk, he gave instructions to build a ‘gatehouse 80ft high with a tower on either side’. In 1362, the castle came into the possession of John of Gaunt, the younger son of Edward III who turned it into a proper fort by strengthening its defences. These were needed for the first time in 1461 during the Wars of the Roses, when it was held by Sir Ralph Percy for the Lancastrians against Yorkist forces. Dunstanburgh then became a real backwater, so much so that by 1470 its garrison had turned to piracy to supplement their income. By the early 1500s it had fallen into ruin.

The hamlet of Boulmer is a fishing community with a long stretch of low houses and bungalows along a flat, empty beach. Above the high tide mark the dry sand is littered with tatty, fishing paraphernalia and the occasional fishing coble is drawn up here when it is not moored off the beach. In the 18th/19th centuries Boulmer was notorious for its involvement in smuggling and piracy.  Crews came from up & down the coast, and from as far away as Scotland, to deal their ill-gotten gains. This included spirits from the Netherlands, salt and tobacco. The Village pub, The Fishing Boat Inn, was at the centre of this smuggling activity.