Now, I love Tenby. This delightful, walled harbour town is a real gem. Built in Norman Times, its narrow streets, historic houses, independent shops, and unique atmosphere became a fashionable destination for Victorian holidaymakers. It remains so today. Tall, coloured terraces stare down with empty eyes from their line of clifftop perches onto the steps, alleys and lanes of the old town. Either side of town, soft, sandy beaches attract holidaying families and groups of all ages. Parties of guys and dolls, celebrating some kind of life-changing event, enjoy the range of pubs and clubs in this small town. A drunken sailor or two would not be out of place, if we could just decide what to do with him. 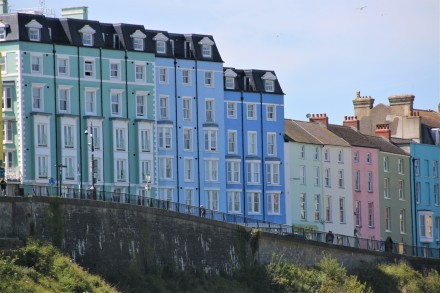 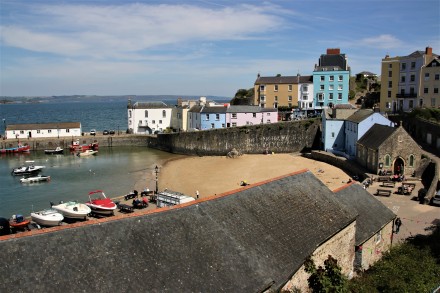 Manorbier Castle was built by the Normans on this site overlooking the bay. The Norman knight Odo de Barri was granted lands in the last decade of the 11th century, and built a wooden hall here, surrounding it with earthworks. It was his son that began building the stone Manorbier Castle we see today. A great square tower was constructed, together with a fine hall block, enclosed by two high stone curtain walls with towers and a strong gatehouse. Behind is the village itself, made up of white-painted bungalows amongst the low foliage of bushes and shrubs. A Norman church shares the skyline.

The waterway that is Milford Haven cuts inland, providing access to the oil terminal of the same name and the docks at Pembroke. Back on the coast, impressive crags & cliffs separate crescents of soft sand. Settlements congregate on cliff tops around these bays. They attract walkers to their windy cliff walks up and down the shoreline, windsurfers to their Atlantic swells and weather-laded winds and families & couples to their beaches and cafes. At low tide it is possible to walk along the sands past headlands and clawing lines of rocks to individual bays and beaches. But beware – it is easy to get cut off by an incoming tide with no way to climb the cliffs. 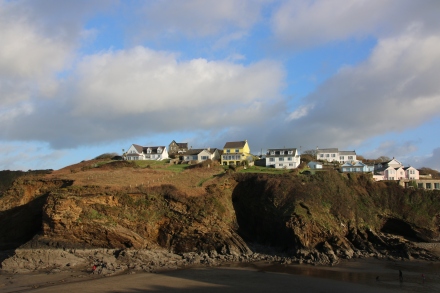 The road descends to a two-mile beach of large rounded pebbles and stones. This was thrown up by huge storms in 1859. It is a mixed blessing. Although it is exposed and magnifies any wind, however slight, it does offer some protection to the houses that nestle in its lee. Kite surfing and surfing are popular here. At low tide at both ends, it is possible to walk along the sand to reach sheltered bays. 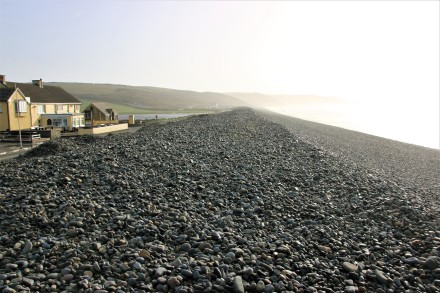 The village of Solva, comprising Lower Solva and Upper Solva, straddles its oen natural inlet. Further up the coast, set on the cliffs above a small harbour and a private residence a mile or so out of St Davids, the old lifeboat station, built in 1869, stands in front of its modern counterpart which was built in 2016. 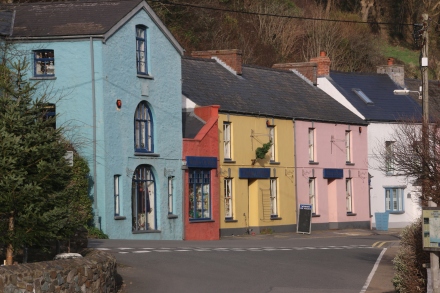 A rather lonely handful of fisherman’s houses huddle around this peaceful spot where a brook trickles over the small beach to reach the sea. Today, many are rented out as holiday homes.

Porthgain means ‘Chisel Port’ in English with the chisel representing the quarrying that once took place here. From around 1850, slate, then brick, and then granite were shipped from the harbour. The crushed, granite road stone was dispensed from the massive brick-built hoppers, constructed at the beginning of the 20th century, directly into small ships moored alongside. These hoppers, and earlier slate quarrying related structures including the lime kiln, the harbour itself and the pilot’s house, can still be seen. Slate was also quarried at Abereiddi and transported along the tram road to Porthgain for export. Mining finally stopped here in the 1930s. Now it is a very popular tourist centre thanks to a great pub, a super café/restaurant and excellent galleries displaying local arts & crafts. 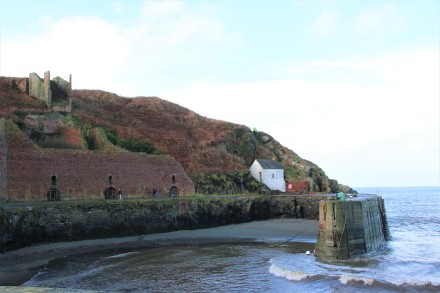 One thought on “A UK Coastal Trip – Tenby”