Clever that, don’t you think? You’ll see how clever as I go through the main towns on this part of the Kent coast. Walmer, with its Tudor house & castle, doesn’t even get a mention. It is its big brother, Deal Castle, that gets all the plaudits. Built by Henry VIII to protect the naval dockyards from the French, it can best be seen from the air with its battlement circles interlocked around each other. This view from the beach does not do it justice although it is in pristine condition still.

Deal also has a pier. A simple pier made of concrete and steal. None of your arcades or bingo or rides. Just a wide stubby structure with a few cubby holes acting as windbreaks ending with an exposed fishing platform and the warmth of Janice’s tearooms. The view back to shore and the town and beach is quite elegant. 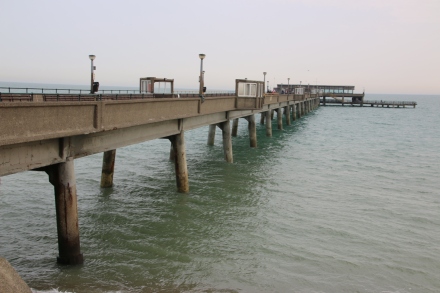 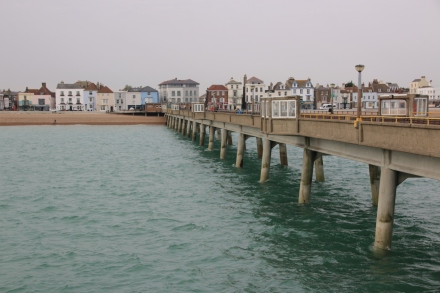 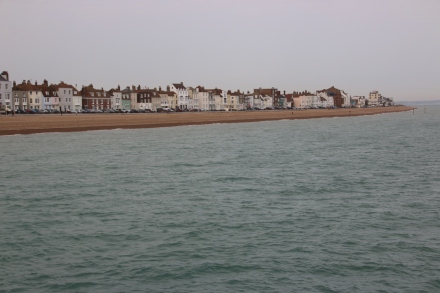 I love this old cinema. It sums up the appeal of the place.

Ramsgate has a certain Victorian charm about it. The crescents of tall, elegant, white-painted terraces curve around the cliff tops like a crown perched above the harbour and docks and glitzy tourist hotspots. But somehow it is outdone by its neighbours on each side.

Just up the coast lies Broadstairs. Now I liked Broadstairs. The bay is small with a lovely, neat crescent of soft sand, lined, almost completely, with a variety of beach huts following the line of the cliffs around the bay. Along the top another crescent of classy eateries, ice-creameries & drinkeries overlook the sands. Small cracks of alleys lead through to a more ordinary part of town which provide for all the needs of visitors and locals alike.

And then there is Margate. Hmmm. Sorry Margate, Broadstairs and Deal just shine out, even though you do have the Turner Gallery with its free admission. 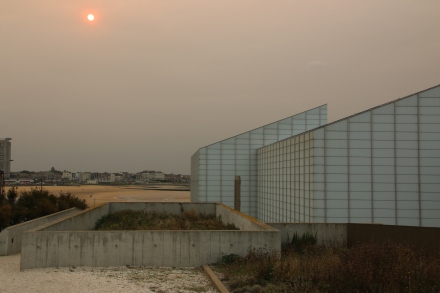