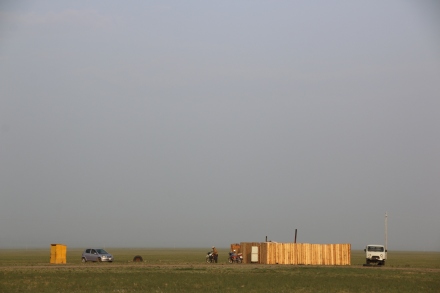 Just outside a stopover is the summer location of a small herder’s ger surrounded by the typical tall, wooden fence. The stove pipe protrudes over the top. On one side is his old, Russian built van. On the other are two standing motorbikes and a small, family saloon. A suitable distance from the stockade is his private Big Drop toilet, grandly painted a sunrise yellow. On the other is a wellhouse, a large concrete cube with a rusty metal door on one side and a pipe sticking out from the bottom leading into a long open trough.

I thought it might interest you to record the activity around this ger at different times of day.

Dawn is around 6. A herd of cattle are chewing the cud in the fresh, morning sun. A bit further away a large group of camels are penned into a small circle.

The metal door on the left opens. Dad comes out, lifts the bonnet of the saloon, inspects the inside, closes the hood and goes back inside. A little lad in a red T shirt comes out, doesn’t make it to the Big Drop and piddles by the motorbikes.

A bit later two female figures, gran, daughter or wife, walk over to the cows and disturb their slumber as they reluctantly get to their feet. They milk them and return to the ger with a silver pale in each hand.

Around 9am, dad appears, gets on one of the motorbikes and drives off. 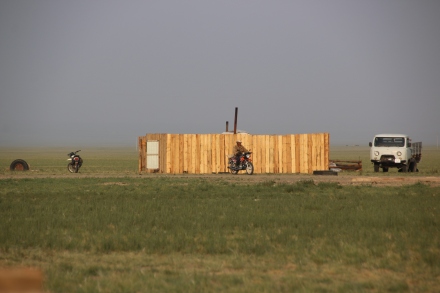 In 30 minutes he returns. Gone to check on one of his herds maybe. He wanders over to the standing cattle and moves them away into the desert leaving a small group of calves on their own. These wander off on their own eventually. Sometime or other the camels have been released from their pen and wandered off.

All goes quiet. Around lunchtime, a large herd of goats wander in from a different direction and hang around the wellhouse in a long line. The ger door opens and dad goes over. He claps them away from the rusty door and raises some water into the gulley. By throwing stones and shouting, he manoeuvres them to the water in groups and then dismisses the whole lot back the way they came, before going indoors.

Then the camels plod in from the west. They stand guard over the wellhouse and the gulley. Indignantly they spy the calves who are trying to sneak in to grab some refreshment. A couple of camel outsiders see them off and then the whole herd of snoitytoity bullies move off to the east having occupied the wellhead for a couple of hours. 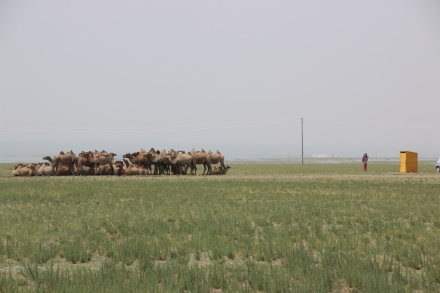 At tea time the herd of cattle reappears, herded by dad on his motorbike. Having spent a bit of time drinking at the gulley they settle down for the night in their allocated spot.

As dusk falls, the camels appear, herded by a figure I have not seen before, riding a horse. They are corralled over by the yellow toilet. By dawn they will be gone on their travels. I don’t know where the goats spend the night.