Welcome to the year of the monkey.  I am told that I have struck lucky. I fly into Manila, the capital of the Philippines, at Chinese New Year and the place is so quiet. Well that’s what the locals say. The trip from the airport to the hotel only takes 25 minutes and the next day is a bank holiday so I can explore the city without getting gridlocked with the added bonus of the excitement of street celebrations.

A quick bit of context. The Philippines has 100 million people and 17 million of them live in Manila.80% are Catholics and 5% are Chinese. The islands were colonised by the Spanish in the 16th century who were looking for spices and converts. The Brits invaded for a couple of years and then the US took over as part of a deal at the end of their war with Spain in the 19th century. During WWII Manila was smashed by the Japanese in their occupation and then by Americans as they took back the islands and the capital. The country finally became independent in 1947. The people speak English because of the American context and operate the world’s call centres.  There’s a surprise. 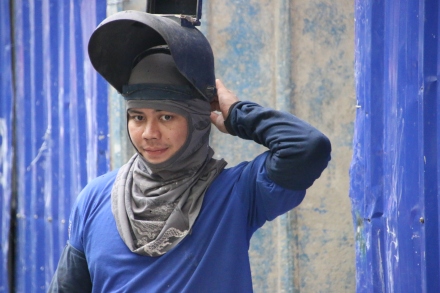 Ok into downtown Chinatown. Public transport is completely different to other Asian cities. First are the jeepnies. These are a. cross between a bus and a taxi. and are brightly coloured converted jeeps that the Americans left at the end of the war that have been extended to seat up to 14 passengers. They bang along their designated routes belching out smoke and gently sounding horns. Passengers flag them down, pay their 7 pesos (10p) and bang on the roof when they want to get off. Then comes the modern Toyota taxi with its air con-the Prince of the road. At the bottom of the heap are hundreds of mostly pedal powered tricycles where every journey costs 3 pesos.. 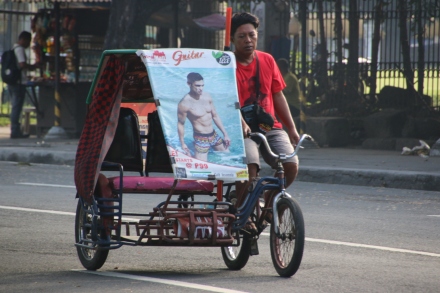 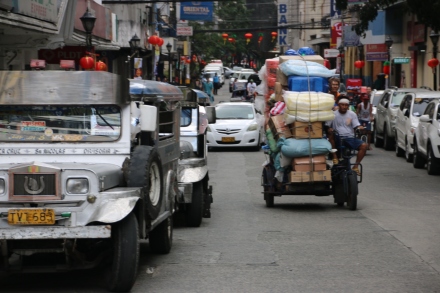 So down into the chaos of Chinatown. The noise of cymbals and drums and canned music compete with cries of sellers and screaming kids and music boxes and street bands. Snaking dragons and fluorescentmoths rear up at clusters of brightly coloured Mickey Mouse balloons or knock on the door of banks or shops.The most inventive are the street kids banging out a funky rhythm with two bits of wood on an olive oil can or a large water container while their mates do the moves holding a plastic veg tray on their head covered with a dirty sheet. Brilliant. There is definitely a place for the Horns and if a band of Manila’s ladyboys can get a samba groove together there is certainly a place for Larkrise. 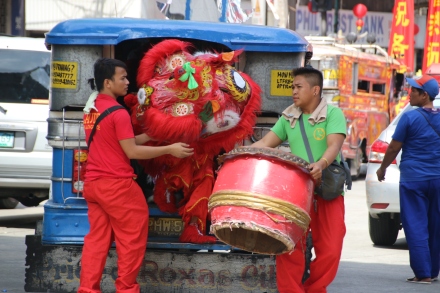 Its quite nice to get into the old town and visit a few churches. The pace drops, the temperature drops and everything gets calmer. What a great first day.