This is proving a challenging day. Best laid plans & all that. The original plan was to leave Villa de Leyva, drive west through the mountains back to Bogota & get a short flight further west to Pereira in the coffee region.

It all started well. Knowing the square was empty as the garden centre had been dismantled last night I had a leisurely walk into town negotiating the conquistadores cobbles. With it empty of plans you can see the true size of this space & the splendour of the surrounding buildings. 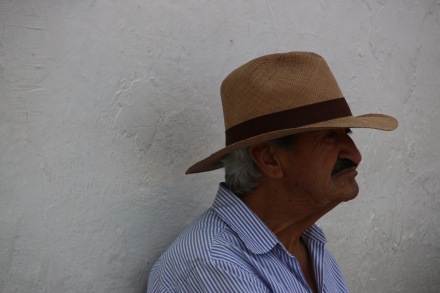 Having taken some photos & grabbed a coffee, I got back to the hotel & was ready to leave at 10.30.

We were going to stop at a crafts village but took a wrong turn. Hey, it put us back an hour but took nothing away from the drive. How special to be driving through the Andes taking in the wide spaces, the serene landscape & the vast sky overhead. Had to pinch myself on several occasions. Had to take some pretty narrow dust tracks to get back to the main road & back on track.

The first indication that time had become crucial was when lunch became a 5 minute stop at a garage. Then a 30 minute wait at road works compounded our problems. It seems that in Colombia when roads are repaired it is closed to traffic in both directions for a mile or so & controlled by lads at each end each with a walky talky. The essential principle of these is that both ends need to communicate & in this case neither lad did! Eventually we led a convoy across and met nothing coming the other way.

Bogota traffic held us up more but despite this we arrived at the airport with an hour to check only to find that the airline had changed the terminal from the paperwork. There followed a dash in cabs across the airport.

All these efforts were in vain. Too late to check in; put on later flight. So writing this in departures waiting for a later flight. Trials & tribulations of travelling!! But that drive was magnificent.