The village of Overcombe guards the approach to Weymouth, two miles away along the Jurassic Coast. The shingle and sand beach has a different feel with very little development. It is a popular spot with local families as well as kite-surfers and kayakers. As the tide goes out the expanse of sand is exposed. The water is zoned to keep bathers separate from water sport enthusiasts. A long esplanade runs alongside part of the beach, and the South West Coast Path passes over the nearby cliffs. Behind the beach is a large grassy area, great for games & picnics and Loadmoor Nature Reserve is on the other side of the coastal road.

A long, wide, sandy beach is backed by a seafront of small hotels, boarding houses, some dating from Georgian times, and a mass of seaside amusements. 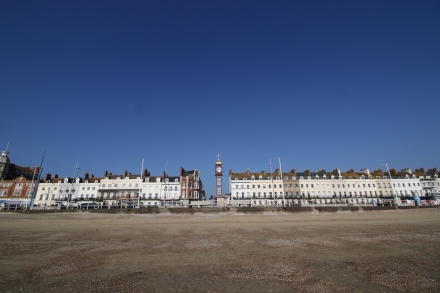 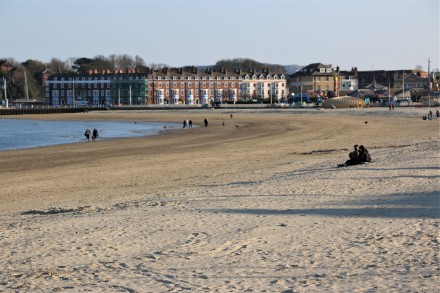 George III began to visit Weymouth for his health in 1789 and established it as a fashionable resort. The town has a long association with the sea dating back to the Middle Ages. In 1310 it was mentioned as a licenced wool port. Cross-channel ferries used to operate from here but these have now ceased. Stone Pier sticks out into the bay. It was built as a breakwater to protect the entrance to the harbour. The harbour side of the pier, and the two smaller ones that stretch out from the main pier, are excellent spots for a bit of fishing by locals & visitors alike.

Commerce and maritime industries have taken the place of the old naval base. The cliffs around the island are pitted with quarries, many still producing stone once used in the construction of St Paul’s Cathedral and Buckingham Palace.

Steps lead down from the heights to small coves of rough stone & rocky beaches lined with fishermen’s huts. 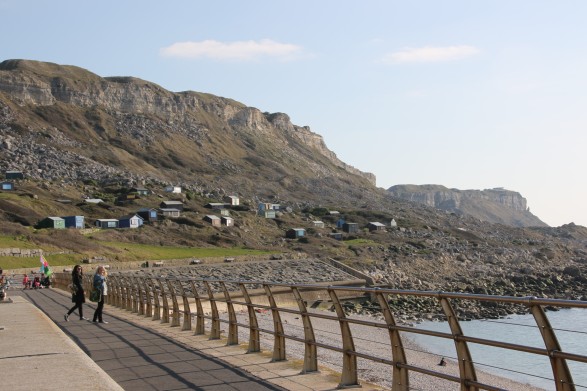 Fortuneswell guards the approach to the Isle of Purbeck at the head of Portland Beach Road where Chesil Beach connects the island to the mainland. It occupies the steepest land above sea level. The strategic significance of Portland was first realised by King Henry VIII, who built two castles to protect the approaches. It became a naval base in 1845 with the construction of Portland Harbour’s Breakwaters. Workers were needed and housing was required on the island as a whole and Fortuneswell in particular. A large number of terraces were built across the village area and crammed into any open space.

The beach is a geological phenomenon made up of billions of pebbles which are now The pebbles on Chesil Beach are graded in size from potato-sized near Portland to pea-sized at Bridport and are made up of mainly flint and chert. It is believed that smugglers landing on the beach at night could judge their position along the coast by the size of the shingle.

Part of the beach rises to a height of 14 metres and this protects a lagoon called The Fleet which forms a nature reserve. This can be reached from either end but there is no pedestrian access along the beach between May and August to prevent the disturbance of breeding birds. Abbotsbury Swannery is on the lagoon, a sanctuary for 600 mute swans on the site of an 11th century monastery.

A single road through the village ends by a steeply shelving shingle beach backed by a a line of quite large, mostly white-washed beach huts and a car park used mostly by anglers. 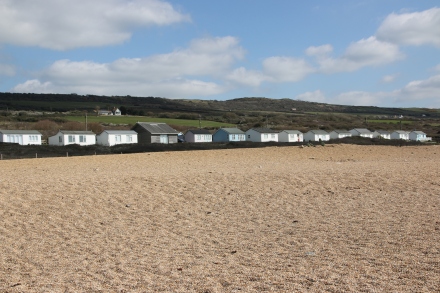 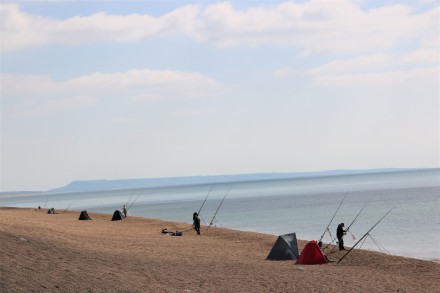 The village overlooks a fine shingle and sand beach. It is known locally as Hive Beach. From the car park there is a grassy picnic area and a track leading to the beach and eroded cliffs. 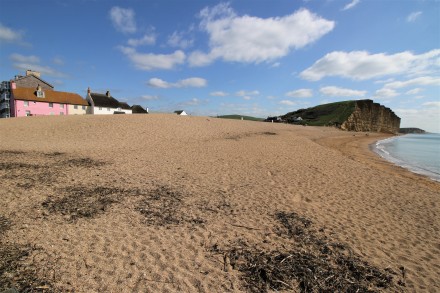 West Bay is Bridport’s former harbour where ships were built until 1879. The man-made harbour is not a natural feature. It was required to export locally made ropes and nets. It has a long history of being silted up, blocked by shingle and damaged by storms. Today the town has a mixed economy of fishing and tourism, a resort, popular with families and sailors.