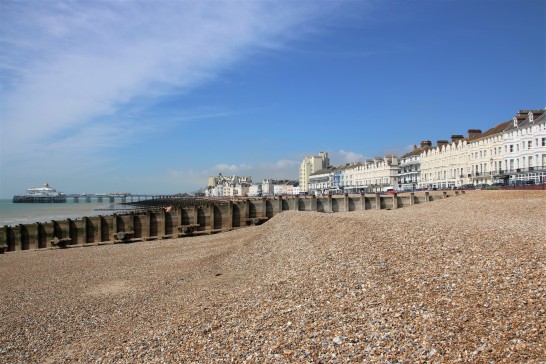 The golden domes of Eastbourne Pier glisten in the full glare of the sun. The pier stands tall and elegant out from the three miles of an attractive seafront of grand Victorian buildings. The palm-lined promenade and the colourful public gardens add a further dimension to this great seaside experience. The pier puffs out its chest to complement the seemingly freshly-sprayed pastel whitewash of its terraced neighbours and the subtle hues of pebbles and groynes that stretch along the beach in both directions.

Four small hamlets existed here before 1849 when the railway arrived. It grew as a fashionable resort largely thanks to prominent landowner, William Cavendish. In 1859, an entire new town was laid out – a resort built “for gentlemen by gentlemen”. And so a period of growth and development began. The centre of the town lies a short distance from the front. Museums are housed in a former Martello tower, a former Napoleonic fortress and a former lifeboat station.

Out of Eastbourne, the massive chalk headland of Beachy Head interrupts the progression of seaside towns and villages. From the edge of Eastbourne rises to 162 metres above the beach. Beachy Head Lighthouse, on a spur of rocks below, was built in 1902. After the Seven Sisters, a series of bright-white chalk cliffs that face out to sea, the road, and the paths on the South Downs, drop to sea level. 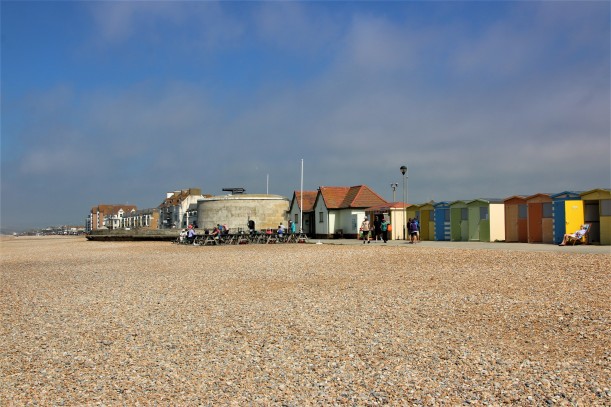 The shingle beach bordering this quiet, mainly residential seaside town shelves steeply and at high tide swimmers should beware. It has a peaceful air with a terrace of well-maintained beach huts to give colour and refinement. A Martello tower still guards the town against foreign invaders, now a museum of local history.

This working port town has a charming side if you look for it. The Dunkirk to Dieppe channel ferry plies back and forth from the harbour on the eastern bank of the estuary of the River Ouse, with two sailings a day. The redeveloped West Quay is home to the fishing fleet that still unloads its daily catch here, with the subsequent presence of seafood eateries and stalls. There is a marina for yachts and pleasure craft and a shingle beach to the east of East Pier. West Beach, though, is privately owned. Due to safety concerns about the crumbling sea-defences and the harbour steps, a fence prevents access to the beach, the breakwater and the lighthouse.