Broadstairs is full of character and history. In the 14th century, a small fishing community had grown up at the base of the cliffs and a set of steps, hence broad stairs, led up the cliffs to a shrine on the cliff top. The town also became prosperous as a centre of shipbuilding. Holidaymakers and the prosperous middle classes were attracted to the town in Victorian times and direct rail line was established in 1863. Access had previously relied on coach links to other stations in the region.

It is now a family-friendly resort with numerous sandy beaches. The main town beach is a crescent of soft sand, backed by beach huts and tall cliffs. Along the top narrow gardens and a clifftop road are lined by small shops. Botany Bay has photogenic chalk stacks and Joss Bay has a surf school. There are fishermen’s cottages, clifftop walks and independent shops lining unspoilt streets, smart restaurants, quaint cafés and even a 1950s ice cream parlour.

Ramsgate has long been both a resort and a working ferry port. Graceful early 19th century terraces line the top roads that overlook the busy harbour. Known as the Royal Harbour after George IV embarked here in 1821, it holds not only the terminus of a ferry service to Ostend but it is also a crowded marina of yachts, sailing boats and pleasure craft. A coastal path follows the rolling white cliffs out of town. Slightly dated amusements and beach huts have spread to neighbouring coves. The main bathing beach is at Ramsgate Sands to the north. The UK’s largest complex of civilian wartime tunnels is here, as well as a row of smugglers’ caves is built into the cliffs of nearby Pegwell Bay.

Deal is a former fishing, mining and garrison town. It was a ‘limb port’ of the Cinque Ports in 1278 and grew into the busiest port in England. Today it is a quiet, seaside resort, its quaint streets and houses a reminder of its history along with many ancient buildings and monuments. Deal has a very attractive, rather elegant seafront with gleaming, pastel-painted buildings, held together with uniform clay-tiled roofs, which overlook the soft beiges and umbers of the pebbles in the beach and the dull blues/greens of the ocean. The current pier is the third to be built here. It is a simple structure, built in reinforced concrete, with little elaboration. It opened in 1957. Glazed wind shelters were built at intervals along its 300 metre length. In 2008 a new feature was added at the end – a glass-walled café/bar. 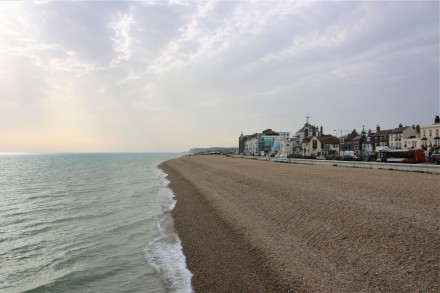 In the days of sail, naval fleets and merchant ships anchored in The Downs – the stretch of water between the town and the treacherous Goodwin Sands – waiting for favourable winds to help them on their journey. Deal Castle rests crab-like amongst the boats and fishing paraphernalia that litter the beach. Built by Henry VIII in the shape of a Tudor rose, it controls Deal against any foreign force. 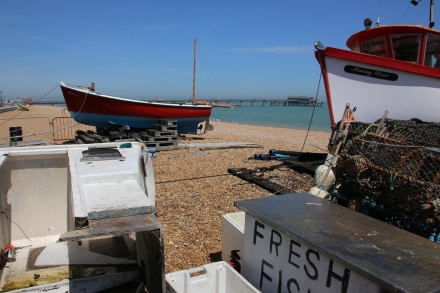 Walmer Castle was built by Henry VIII in 1540 when the sea came right up to its walls. The interior is panelled with portraits and relics of the Duke of Wellington who died here.

A very narrow, winding lane takes the brave driver down to this hamlet of holiday homes and fishermen’s cottages and around a broad shingle beach dotted with boats and small huts. 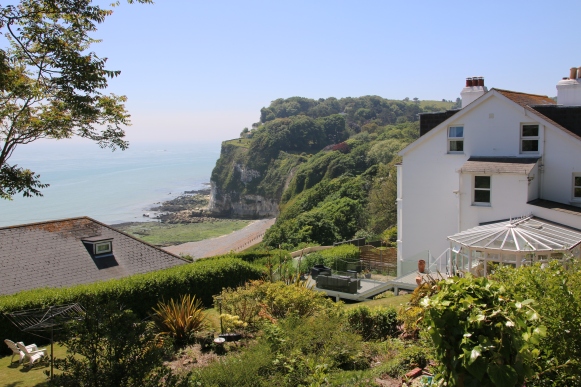