This rather ordinary resort town expanded in Victorian times with the coming of the railways. Groynes are set along the beach which is separated from the road & terraces by a pleasant promenade.

An impressive castellated structure is the rather grand entrance to the town’s long, soft sandy beach. Peeping above the terraced houses that look onto the seafront is the lighthouse, now home to a museum.

This small village at the base of Spurn Head used to share the coastline with several other settlements. All of these have now been lost to the encroaching sea. Now a caravan park at the edge of the village, clings on to solid ground as the sea nibbles away at its feet.

The long, flat piece of sand which is Spurn Head Nature Reserve curves around across the mouth of the River Humber with the North Sea on one side and the river estuary on the other.

The magnificent Humber Bridge, crosses the river a few miles upstream, hitting the south bank at Barton-upon-Humber. When it opened in 1981 it was the longest single span suspension bridge in the world. In 2020 it is the eleventh longest.

Along the both banks of the estuary, industry rules.

Grimsby has a proud history of being one of the greatest fishing ports in the world. Until the mid-1970s, 200 or so deep-sea trawlers sailed from here to northern waters. Whilst not as large as in the past, there is still a commercial life to the town. Fish is still landed here and sold in the dockside fish market. In amongst the disused factories and the modern yacht marinas, some of the old curing companies and fish packers still exist to process the catch. Empty factories and warehouses, window spaces gaping, are cluttered by small hills of bricks and tangles of metal. 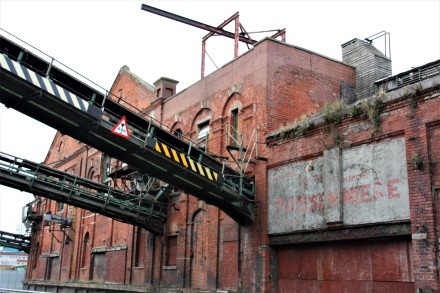 Vehicles for export are collected in vast dockside carparks and await loading into the bowels of their mother ship. New industry, business initiatives and commercial centres back onto the sea, presenting their smart frontage to the town. A container port now operates from the quayside.

The town really became popular as a holiday resort with the coming of the railway in the late 19th century. Lined with amusements and arcades, the promenade runs along the beach for 4km or so. The town is full of fish & chip shops competing with each other for the accolade of ’the best in town’. One advertises a ‘Victorian experience’ matching the many buildings of the same era. The sea goes out almost a mile over the soft sands and visitors should take care as there are fast incoming tides. At dawn the beach is given a daily makeover, manicured, by a tractor-mounted rake. The result is a flat, even surface, gradually disturbed by the footprints of dogs and walkers.

The pier was first opened in 1873. A pier-head concert hall was built in 1888 but destroyed by fire in 1903. A new pavilion was built near the shore in 1905 with a cafe and shops on the site of the original building. During WWII, the council, who then owned it, demolished part of it and created a gap in the structure to act as a defence measure in the event of a German invasion. After the war the isolated seaward section was demolished and the pier now measured 100 metres compared to its original 365 metres.

One thought on “A UK Coastal Trip – Cleethorpes”