Well, here we all are stuck in our little bubbles hoping the world will stay away and not burst through to harm us, our loved ones or those out there least able to deal with such adversity. We are all out of sorts and unsettled, unsure for how long the present crisis will last. At some time in the future we will get our lives back. Let’s hope our world will not have changed too much by then and we can return to whatever it is that gives us our happiness, our harmony and our value.

So, what to do in the meantime? As you know over the years I have been sharing a blog of images and words, reflecting my travels and my passion for new places and cultures. So, I thought: use my catalogue of experiences and images to show what a wondrous world still exists out there and provide inspiration for planning visits and travel once life returns to some normality.

Firstly, I am going to share with you my journey around the coast of the United Kingdom. It is incomplete at this juncture. I had planned to cover the last regions (the West Country, the North West and, maybe, Scotland) in the coming months but the present situation has put a kibosh on that. However, the internet is a powerful tool, so where I lack my own material, I will draw on information put up by local tourist boards.

This project started 6 or so years ago as an attempt to visit the many places of the UK that I had never visited before. I decided to visit every settlement, every hamlet, village, town and city, that is sited on our coastline and take an image of the shore or from the shore. I started in the North East, purely because most of the east coast was largely a mystery to me, and moved clockwise around the UK.

Berwick is a town full of history and memorials from a turbulent past and just 3 miles from the Scottish border. In medieval times it passed backwards and forwards between the Scots and the English. It was captured and sacked13 times before finally falling into English hands in 1482. It still retains close connections with Scotland as demonstrated by the fact that the town’s football team plays in the Scottish League. The town is on the north bank of the River Tweed. Three bridges cross the estuary at this point.

The first, seen here, is the Jacobean Berwick Bridge, built of stone between 1611 & 1635 which now takes one-way traffic from east to west. Behind that is the four-arched Royal Tweed Bridge, built in concrete, which takes the A1 main road around the town. The third, the Royal Border Bridge was built by RL Stephenson in 1847 to take the main line railway over the estuary.

Berwick’s walls and ramparts were built in Elizabethan times to protect the town from the invading Scots. These defences, wide and extensive, can still be clearly seen. The road to the golf club, the cliffs and the town’s small beach cuts through the thick stonework in a narrow tunnel. 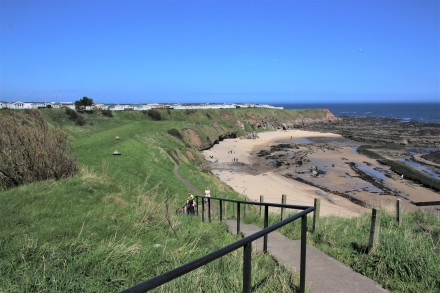 On the southern bank of the River Tweed, Tweedmouth is part of the suburban overflow of Berwick-upon-Tweed.

King John attempted to fortify Tweedmouth against the Scots in 1203, but building the defences were interrupted twice, and his half-finished castle was finally destroyed when William the Lion of Scotland occupied Berwick. In an annual ceremony dating back to 1292, Tweedmouth schools elect a Salmon Queen to mark the start of Salmon Week, a traditional celebration which dates to medieval times.

The small resort town of Spittal lies further along the south bank. Its lovely, soft sandy beach can be seen beyond the RNLI Station. It is backed by a Victorian promenade and ‘Venetian’ pavilion, built in 1928. Berwick’s Lighthouse can be seen far away on the far side of the estuary.

A single-track road runs through the fairways of Goswick Golf Club, parallel to the dunes and between the railway line and the sea. It acts as an artery for the homes and the smallholdings that form this hamlet.

One thought on “A UK Coastal Trip – Berwick-upon-Tweed”