As the sun took a day off today it was time to go exploring in the car. Roads follow the coast and wind through the contours that mark the mountains and ravines. It takes forever to travel any distances and the sat nav shows why. The routes are shown as a long, tight snakes lassooing its way through scrubby green terrain. Following the coast road south, these images are typical of the glorious open space that is Corse. 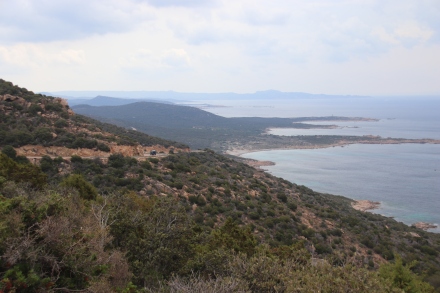 Our destination is Bonifacio, right at the south of the island. Strategically the town was at the crossroads of the early trading routes between Italy and Spain and north Africa. Pisa was the first country to govern here until the end of the 12th century. It’s position bought wealth and revenues to the town through fishing and trade. Initially the port was simply a beach where fishing boats were drawn. After 1900 the marina was build up and the quayside cafes and eateries established, making it a docking place for the yachts and boats of the rich and famous, many dwarfing the dusty, faded buildings. 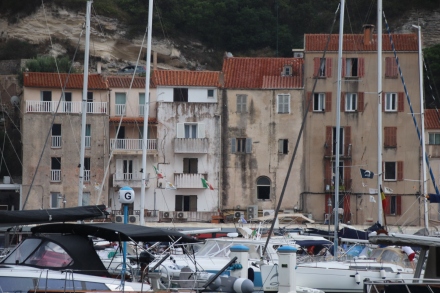 A long terrace of classy table layouts and extortionate menus pull well-heeled owners from their gin palaces to pose for the rest of us as we shuffle along at our visitors’ pace like groups of penguins in awe of another species.

Overlooking the harbour scene from its position on the tall limestone cliffs is the old town, guarded by the massive, medieval citadel, built in the 9th century. It is in its narrow streets that the full force of the tourist can be felt. Trails of cars move into town to squeeze every space from the car parks, releasing families and groups to zig-zag their way up cobbled steps and inclines to the massive gates and shops, built to keep seafaring enemies away and not cash-touting visitors.

The cobbled streets, particularly around the Church of St Marie Majeure, the oldest building here, are squashed between tall buildings linked by lines of flying buttresses. These are evident throughout the old town and are not required to support the buildings but are gutters which distribute rainwater around the settlement and into water tanks. Substitute pirates and merchants and fishermen and capes and gowns for the skimpy shorts and the strappy tops and the buggies and the carriers and the streets ooze history and times past. Romeo art thou there?