I crossed over to the island of Anglesey on the Menai Bridge, built to take stagecoaches in 1826 by Telford. Not much has changed, only the vehicles using it.

I decide to go anticlockwise around the coast of the island.The island is a poor neighbour compared with the grandeur of neighbouring Snowdonia but it can piggy back on the peaks in the distance which overlook the Straits, so narrow in parts and include them as part of their own. The landscape is more mellow but striking has a unique feel with low rolling fields and open land playing host to grazing animals.

The weather is breaking. I am aware that rain is forecast later in the day. You’ll see from the images where I have to play hide and seek with the drizzly showers. But not in Beaumaris, my first stop. In the fading sun the magnificence of the scene is amplified. It boasts a pier. However this structure would not push anywhere in the UK Pier of the Year competition. It may be the best, well only, pier in Anglesey. However it could be top in the Best Spot for a Pier league. Look around and see what you think.

Red Dwarf Bay is such a cool name for a settlement. And the Ship Inn makes the most of its position on the edge of the bay. 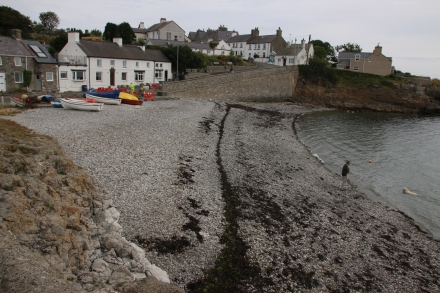 In the past the area around Amlwich was the largest copper mine in the world. Cooper was used to line ship’s bottoms and to mint coins of the realm. The port was a bustling centre where copper was sent off around the world. It still has a certain atmosphere with an outer harbour used by modern fishing vessels and an inner harbour with evidence of its historic past. 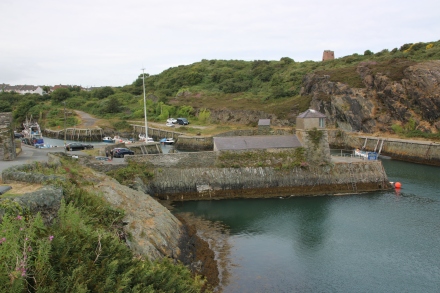 Cemaes has a lovely little harbour.

I cross to Holy Island. Holyhead is the largest town on the island and the departure point for ferries to Ireland. It seems like a town that the world has forgotten. Everyone seems to pass through it and be on the way somewhere else. Its streets are full of tired buildings and shops I have never heard of advertising cheap goods from faded window displays. Locals are hanging around nursing cups of tea in cafes with 1950’s decor. I found the harbour as the drizzle hardened. It seemed appropriate somehow.

Here are the last few coastal settlements on the western side of Holy Island and across to Anglesey.

Aberffraw is on an estuary but such a lovely spot that I’ve included it…and you can see the dunes that line this part of the beach. 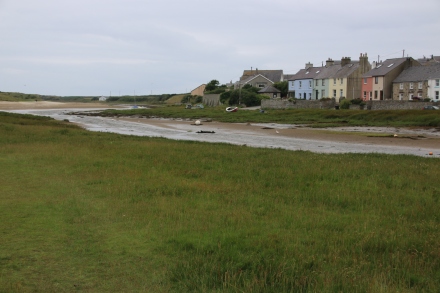 So I have completed my two island tour and arrive at Brittania Bridge, built by Robert Stevenson to carry rail traffic direct from London to Holyhead. In 1972 a fire destroyed much of the structure. On the original piers a new bridge was built with two levels – the railway crosses on the bottom and a new road bridge was built on top.

I have now completed the whole Welsh leg of my project, visiting every sizable settlement with a beach of one kind or other. I’ll see you on the next leg.

One thought on “Anglesey come rain or shine”