Hi Everyone. For me, it’s down to south Devon for a few days over New Year. I have rented a small cottage in Dittisham, overlooking the calm waters of the Dart estuary, between Totnes and Dartmouth (more about that on another occasion). Today I went exploring. I decided to complete the short stretch between Dartmouth and Salcombe as part of my journey around the UK coastline. This section has tall cliffs interrupted by crescent bites of beaches gnawing into the landscape.

Unable to access the coast through the sizable settlement of Stoke Fleming due to its location high up on the cliffs, I drive south of the Dart to find Blackpool. Yep, absolutely true. Blackpool Sands has a similar wide beach but only a few rather classy buildings and an extensive tea shop and eatery. Three rather forlorn beach huts separate the car park from the refreshments.

Streete is also high up on the cliffs. A mile or so out of town the road drops down to the wide crescent of Slapton Sands with the unusual sight of the fresh water nature reserve on the land side separated from the sea by a long, thin spit of land which holds the road. 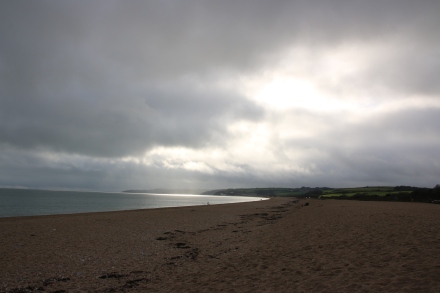 Torcross at the southern end of the beach is a village of tea rooms and holiday lets hiding behind the sea defences with larger properties holding more impressive positions overlooking the sea from the surrounding cliffs. It’s only claim to fame is that it was a practice beach for unloading troops before the D-day landings. Indeed a tank was found in the sea just off the village around shuts in the car park to be admired by visitors.

Across the cliffs, Beesands is an old fishing village from where crab and lobster fishing took place. This single street settlement hides behind an impressive sea wall, fronted by huge giant rocks, with a small beach at one end, a pub in the middle and a tall closed up house at the other end. 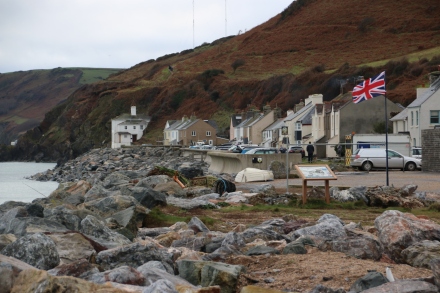 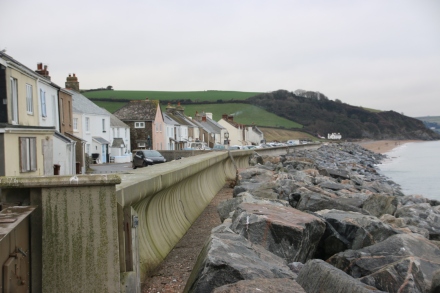 Hallsands is even smaller. It too has a beach. But the sea defences here failed to stop the cliff erosion and now the cliff road has been cut and the terrace of houses at the far end leans close to the precipice, in danger of collapsing onto the rocks below.

Start Point Lighthouse can be seen in the distance. 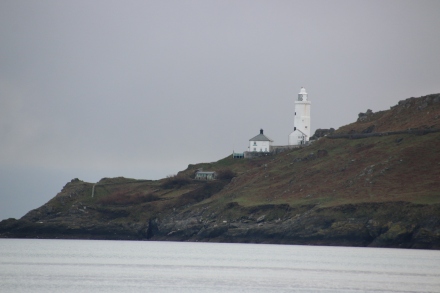