The best thing about knowing people in Chicago is that they know the hotspots and how to give you a really good time. Here are a few exceptionally warm, and some really hot, spots.

Firstly, Tuesday evening. It’s dinner at a Cuban restaurant with some work mates. Dark, low ceiling, nets, images of Cadillacs and bowls of fruit on the walls. Pulled pork with rice for me, washed down with copious amounts of BYO red from Aldi. The band started to set up – flamenco; a wonderful guy on Spanish guitar, a youthful singer and husband and wife dancers. It was all very intense with lots of clapping and stamping and pouting and yelling and posturing and waving, but so passionate.

From there it’s an Uber to The Green Mill Cocktail Lounge to listen to The Fat Babies performing classic Chicago jazz of the 1920/30s.

The room warmed up and so did I, helped by numerous rather large rums until my jiving feet got the better off me and I swung the night away. This is me outside the club at the end of the evening about 1am. I think I look fully in control and quite stable. That is Kate, my daughter, looking after me. 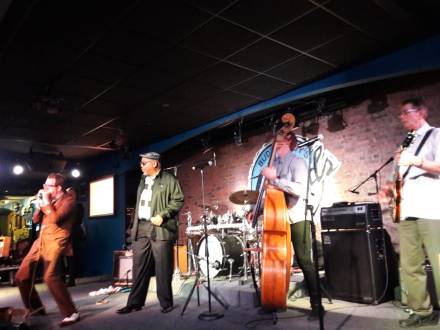 I fully engaged in traditional US bar games which I’d never heard of before. Shuffleboard can be played on a lovely wooden table or on a ship’s deck. I chose the former in the very superior surroundings of the Chicago Athletic Association. It’s a bit like the English game of Shove Ha’ppeny. 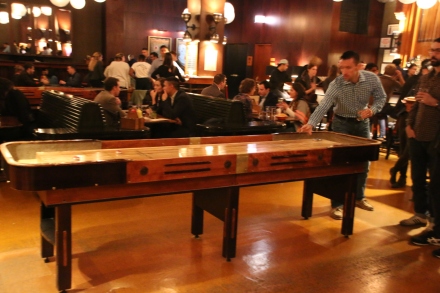 Skeeball is played in bars and involves rolling balls up a ramp into holes with different values. A bit like a cross between bar billiards and crazy golf without the cues or the clubs. It also involves lots of yelling and screaming from other team members.

Oh. On my first night I went to see the ice hockey – Chicago Blackhawks against the Columbus Blue Jackets. Chicago won.

So, there is no shortage of night life in this buzzing city. I’m exhausted!!