Well, I saw the forecast and saw there were five days of super dooper, wall to wall sunshine coming our way, typical, as the schools go back. Still, never to waste a gift horse, and particularly a sunny one, I thought I would catch up on my coastal tour. You may remember that I left you just to the east of Brighton. Well I am picking up the trail in Bognor and travelling westwards.

All I remember about Bognor is that I spent a weeks holiday at the Butlins there eons ago, when my sister in law at the time worked for the company. It must have been in the 80’s. My family still have the ‘spacehopper’ beach towels which are as thin as tissue paper now and show how cutting edge my holidays have been in the past! Well not a lot has changed in the town. A few of the apartment blocks head been spruced up a bit, there was scaffolding on the top floors of some buildings and gangs of men were painting and sawing in an effort to get the kiddies play areas ready for the season. 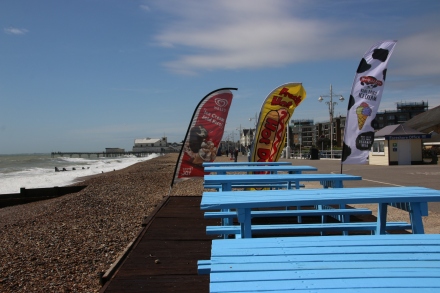 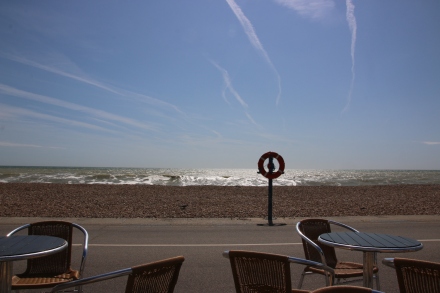 The esplanade, (what is the word for that flat bit that lines the beach?) was almost deserted. The sun was out but the ocean was in a bad mood. Snarling, it enjoyed throwing its full force of pebbles up the beach and then cackled menacingly as it dragged them back down below the surface. A few families huddled under coats and scarves and forced their way along between the gusts. The tea shacks, with their aluminium tables, are spread out at 100 metre intervals to provide shelter for the brave to get through their ice creams or quickly cooling paper chooks of tea. I expect the arcades will be doing a good trade today. 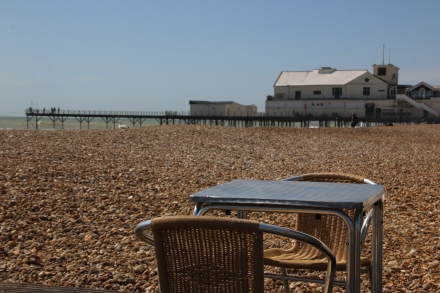 Then there is the pier. At least I think it’s a pier. It must be the stubbiest pier in the whole of the UK. It must be a pier because there were a handful of guys fishing from the end. I went exploring and made a bit of a boo boo. Climbing up some iron steps I thought I would climb up 3 more and take a piccy of the town. This I did and when I turned around there was a guy standing at a corner watching me. I smiled, no response. I nodded, no response. Then he said in a very gruff voice – “the bottom of your boots will be covered in green paint”. I stood wooden, stayed silent, squinted my eyes. I realised he had just painted the three steps in a light green colour. I apologised and rapidly moved to my exit only to look down and see the print of the soles of my boots clearly marked out on the metal platform of the pier. There was little I could do except quicken my pace and made a very hurried departure out of town before he asked me to clear it all up. I don’t think there is a lot in Bognor to draw me back; not even my work of modern art.

From Bognor I have driven to Selsey and followed the pebbly, ne stoney, beach around the headland to the Witterings. There is no real break in the beach, nor in the mixed housing that lines the way around. 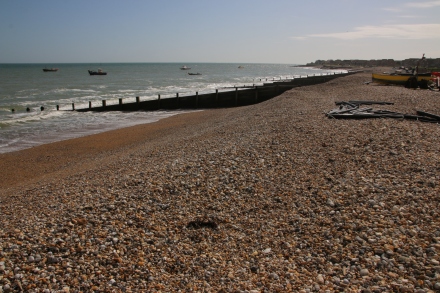 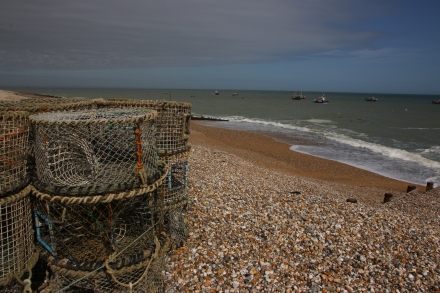 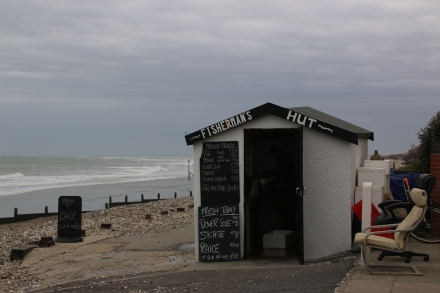 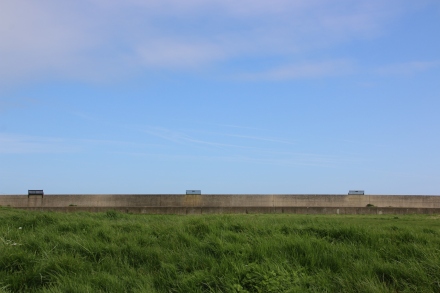