Lijiang slowly stirs as the sun comes up over the mountains surrounding the lake that feeds the canals that flow alongside the streets. The air is crisp, the light is clear, colours are bright, the place has a mellow feel as the town gently awakes. 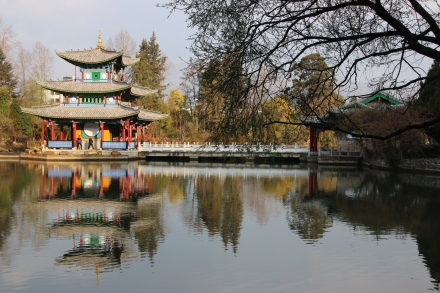 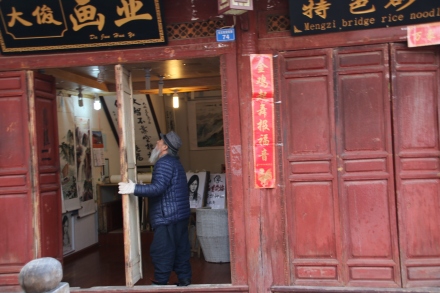 Then a short bus journey to the magnificent Yangtse, the third longest river in the world. At this time of year it is a bit deceptive as the monsoon rains have yet to arrive so the slow moving waters make their way through fertile, terraced banks and sand bars.

My first sight of the river is in its middle stage. Coming through the mountains on the new motorway – another amazing piece of construction across high peaks and deep valleys. The river appears through the bare trees as a wide ribbon of turquoise and brown glass.

Moving upstream I take lunch at the First Bend of the Yangtse River where the local geology forces the south bound river into an almost 180° turn. 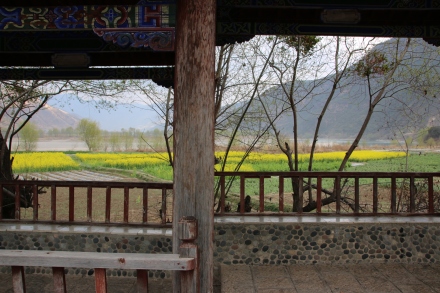 From here it’s further upstream to Tiger Leaping Gorge where the river is forced into a fault line some 4,000 metres below the highest peaks. In places it is only 30 metres wide and the waters are a roaring, swirling, gushing torrent for several kilometres. Locals named it as the place where tigers could jump across the narrow gap.

The road winds high up on the mountain side following the line of the river several hundred metres below with nothing between the wheels and the miniscule, watery line way, way below. Those of weak heart – avoid.

Tina’s Guest House is on the road, high up on the mountain side, half way through the gorge. Huge teeth of mountain dwarf the few outposts of humanity who try to stare out their huge Himalayan neighbours of stone and ice and power and age. The wind howls through the gorge and around the guest house creating a concerto of notes and movements. Inside is warm and nesty with hot water, comfy beds (with electric blankets!), beer, filter coffee, hearty food & good Wi-Fi. Bliss. The view from my room door: