This is played in a large shed in the stadium complex. The Ankle-bone Shooting competition involves the champion team from each province. Teams are made up of six to eight players of mixed ages, some old guys, some young, even some children.

Ankle-bone Shooting is a bit like a cross between bowls, Aunt Sally and Tiddley Winks. Two teams line up on low seats opposite each other. One or two shooters from each team face the far end of the carpet where there is a small wooden structure. Stood within it will be a number of ankle bones from a small animal. The further into the game you get, the fewer target bones there are. The winning team is the one that has knocked down the most bones, which is shown by the number stacked up on their side of the carpet.

Each shooter has their own style. A small, rectangular, piece of deer’s horn is used as the bullet. It is flicked from a polished ruler with a low edge along one side. The shooter will use his knee to steady the ruler and aim. He will use his middle finger to flick the bullet to knock target bones off the line. Each team will collect these on their own sides of the target box. 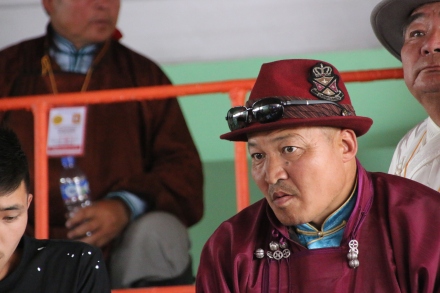 Ankle-bone Shooting is a noisy affair. Team members line up to take their shot. As each concentrates, his own team sounds out a mellow melody whilst the opponent’s team will try to distract the shooter with loud, sharp sounds and voices. Large cheers will go up when a bone its dislodged. With a many as twenty games going on at the same time you can imagine how loud it is.

“The games social role is to reach the younger generation to compete politely, to work together as a team and to have a calm team spirit.” Maybe the Premiership could learn a thing or two.