We followed the main road out of Ulaanbaatar, on the way dropping into Gandan monastery, the largest functioning lamasery in Mongolia and the seat of Buddhist studies. 70% Mongols are Buddhist. 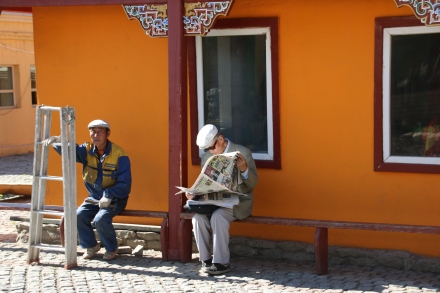 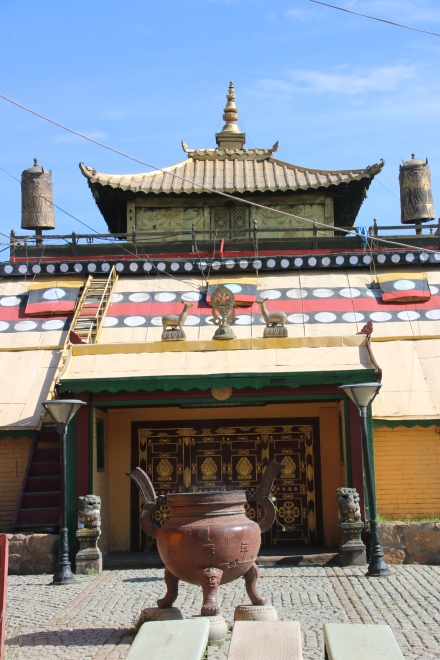 Gradually the commercial and industrial areas peter out and the grasslands begin to show. The emptiness starts to stretch away from us on all sides. The road rulers straight ahead to the horizon on the gently undulating folds of a puckered up table cloth. Every few miles, off on one side or the other, a collection of low, squat circles or peaked painted rooves indicates a settlement of some kind, with horses stirring up the dust. Then we turn off onto a gravel track and head inland towards the ger camp and away from the road and humanity. The drivers take no hostages. Foot down, they charge through the scenery until we stop at the top of a small range of hills. Wowsa. Look at this. Just empty.

I am now, sitting outside my beautifully constructed ger. It is like a little felt house for three equal sized bears. Its lattice walls and painted timber rafters can be put up in a few hours. It has four little painted beds, a low table painted preamble with swirls & curls, with 4 little painted stools  around it. It just needs Goldie Locks to make the party complete.

These Mongols must have been small. I have already scraped or banged the top of my head on numerous occasions. The best was when I was putting on my Tshirt as I was leaving the ger. I hit the flat of my forehead on the top of the frame with such force that I dislodged two of the rafters which clattered to the ground past my shoulders. Didn’t hurt at all. Sounded good though.

The afternoon is spent searching for the Przewalski wild horses. I am sure that you all know that this is an unique species of horse that nearly became extinct but now over 300 survive on the Mongolian steppes. It is a bit like whale watching in the Indian Ocean. Instead of boats chugging about to get the first sighting, 4x4s charge along the dirt tracks, stopping, offloading their passengers, pointing at rocks that may or may not move. They are eventually seen cantering down to the grass by a small stream, where they stop and pose for photos from an appreciative audience. That’s them, the famous horses in the far group. 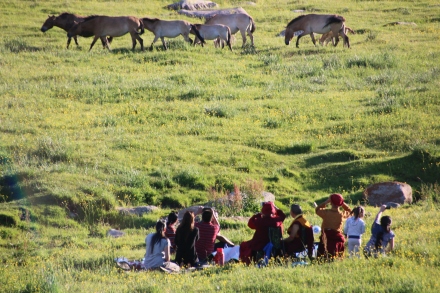 The next day the real stuff starts. There is a bit of a health warning here. Many of the images are taken from the inside of one of the vehicles. I have included them to try and give you a flavour of the landscape and people rather than for their photographic qualities. Having picked up provisions, the four 4×4 set off out of town on the last proper road that we’ll see for seven days. A picnic lunch of mutton dumplings (like a donna kabab in a pasty shell) and we hit the dirt track. At this point the steppes are green and luscious. Gers dot the landscape and herds of cattle, sheep and horses wander and graze contentedly. All is at peace with the world. 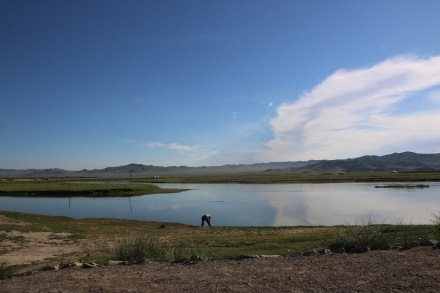 The dirt track has simply vanished. In its place is a fan of light parallel ruts that head of in front of the vehicles and occasionally come together and cross before heading out on their own again. The drivers hammer along these ruts at anything up to 80 kph making strategic decisions at every junction about which route to take out. I think we are heading south into the desert. The heat is intense. Only one vehicle has working air con, the rest of us sit in the hair drier breeze from open windows. The only indication that you have any human company at all are the little squirts of dust far ahead or far behind from the other vehicles. Oh, just in case you wanted to know where you were, we pass two sign posts in the course of the day! Do you like this one?