The 44/100 to Vladivostok is pulled into platform 1A by a small diesel with its big, big brother that will take us there, silently gliding in backwards. I start walking along the carriages. Am a bit concerned that the end carriage, which is first, if you see what I mean, is number 20. Half a mile further on is home for the next three days – carriage 4 and compartment 9.

Let me introduce you to one of the two provodnitsa that guard the steps to carriage number 4.

It’s a bit like being in charge of a dormitory at boarding school with a uniformed, Stalinesque matron. Keep on their good side and keep smiling and there is a perceptible softening of their facial features, the stern facade drops ever so sIghty and, with considerable trepidation, an approach might be considered. Like most Russians they speak no English and don’t even try. I had to mime the fact that we’d run out of toilet paper – use your imagination!

In pairs they tag team their own carriages, one on nights, the other on days. They sort dirty linen, hand out clean sheets, empty rubbish bins, clean the corridors and the two toilets, act as ‘no fuss’ security guards by their door whenever the train stops, check tickets and very occasionally grimace which is the only indication that you have been accepted. They give the only sign that the train its about to depart which takes the form of a curt nod. If you miss it, you face a long walk.

I fall at the first hurdle in Moscow. A rather large, hairy Russian gentleman its settling into carriage 9. He is not supposed to be in here. Despite numerous approaches to the provodnitsa and the full catalogue of smiles and charm, there is no option – Boris, as I have decided to call him although his name is Sergei, has to stay. He doesn’t help his popularity rating as he spends most of the time in shorts displaying an extremely large and hairy torso, particularly around the shoulder area. I have to emphasise that these are not the largest of compartments. Boris clambers up to a top bunk and stares down at the interlopers, like a large primate contemplating his next swing down. Pushing away images of King Kong grasping out for little old me, I settle down below and let the rhythm of the tracks take me to the land of nod. 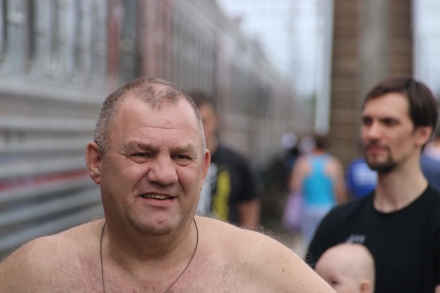 The noises eminating from Boris are enough to eventually end my first night of light slumbering.  Every carriage has a big urn full of boiling water. I take my teabag and mug, make my tea and watch the sun come up over the passing forest of silver birch & pine.This will be the scene for the next five days and 4,000 miles. Very cathartic.