So today it’s a trek through the jungle around Luang Hamtha passing into several tribal villages on the way. The day starts with blue skies and yesterday’s rain is a distant memory. First it is down to the market to buy lunch which we will cook in the jungle – fish, vegetables, bananas & omelettes.

Then, in large took tooks, we travel to the first tribal village of the Lantern people. Dressed in black with white bandage leggings, they come out to sell us their embroidery.

Then it is on to the jungle. The trek starts at the site of an old stupa that was bombed by the US during the Vietnam War. A new gold painted one has been constructed in its place. As we explore this, a party of 50 or so officers from the Vietnamese High Command, with hats & medals & glossy uniforms appear. They start taking photos of our party of white Europeans and we do the same. The boot is on the other foot as they turn their screens to show the pictures they have taken of us as we reciprocate with them. Both groups laugh together at this random meeting of two cultures in the middle of the jungle. 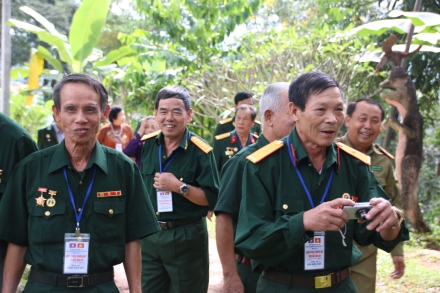 Wet & damp from the rain of yesterday we slip & slide along a narrow path avoiding Tarzan vines, hanging caterpillars, thin grasping creepers & large dripping leaves & fonds. Hot, steamy & overpowering, warnings of leeches are at the front of minds. The path scrambles up & down steep valley sides and meanders around tree root & holding branches. After two hours of hacking through this luxurient vegetation the goodies are prepared, the bar-b-q lit from forest litter and the table laid. Only then is the first leech found as blood appears on my foot. Quickly that is treated and lunch is started. The sky darkens. Torrential rain falls soaking everyone & everything. Lunch is abandoned as we slide out of the jungle to cross the bridge to the tribal village only to find the rope banister along the twin bamboo bridge over the stream to have been cut. of course it is Sod’s Law that at this point the sun comes out and we steam contentedly. We have to clamber 100yards upstream & wade across the stream. Then we group together & like gorillas in the mist pick the leeches off each other. Only six have drawn blood! What a bizarre day. 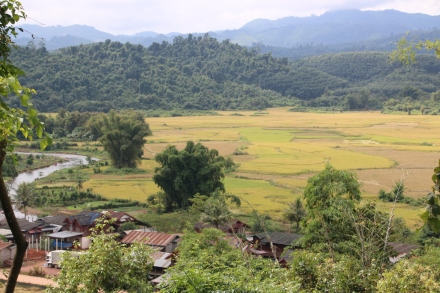 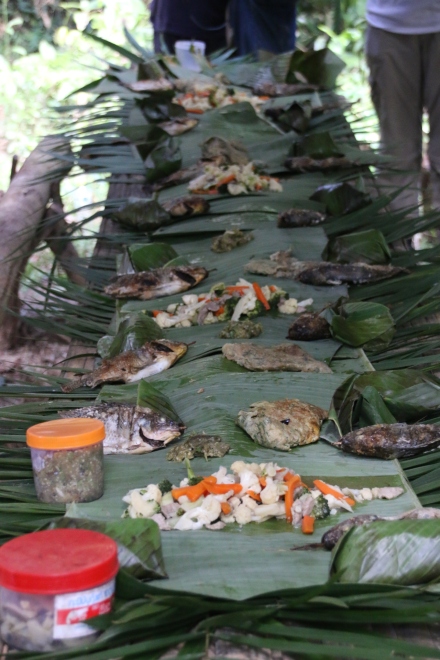