Read and look with caution. This is a virtual section of our coastal trip, with images and blurb taken from Tourist Board and town websites.

Fishing boats supply fresh crab and lobster every day. There is a village pub and a good cafe/restaurant. A perfect place for peace and quiet, especially in spring and autumn near the most southerly point in mainland Britain. 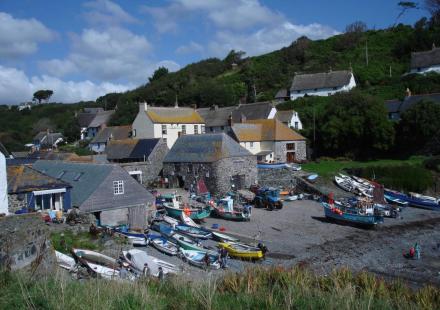 This is a small hamlet with a cluster of houses around a sharp rocky cove and a steep, narrow slipway with a small number of fishing boats hauled up to safety. At Church Cove two treasure ships were known to have been lost – one in 1526 and the other in 1785. 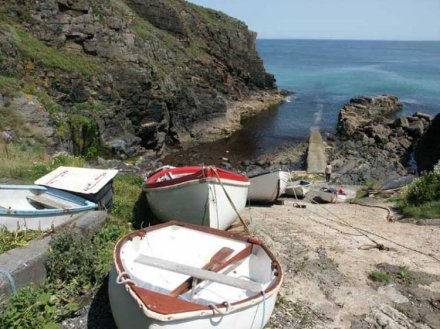 Lizard Town, also known as Lizard Village and The Lizard, is the closest settlement to Lizard Point, the most southerly point in Britain.

Lizard Town, while not particularly charming architecturally, has a real community atmosphere and an excellent pasty shop. Lizard Point is an easy walk from the village green, as is the parish church, the lifeboat station, a collapsed sea cave known as the Lion’s Den, a restored Marconi workshop and The Lizard lighthouse, whose beam has a range of twenty nine miles. Since 1751 there has been a lighthouse on Lizard Point, warning shipping of the dangers of this beautiful but treacherous coastline. Just offshore are the Man o’ War rocks. Below the point is the Old Lifeboat House.

Lizard Town is the hub of a cottage industry that converts locally quarried Serpentine stone into attractive ornaments. The town is located at the centre of the largest outcrop of Serpentine rock in Britain. Serpentine ornaments were particularly fashionable in Victorian times but the village still has several serpentine turners working during the season. There are several craft shops, gift shops and galleries. This is also an area which boasts a number of scuba diving schools.

Mullion is the largest village on the Lizard and has shops, inns, cafes, restaurants, craft shops and art galleries. In the centre of the village is the 15th century church of St Mellanus. Mullion Cove has a pretty working harbour, protected from the winter gales that rage across Mount’s Bay by two large sea walls. The harbour was completed in 1895 and financed by Lord Robartes of Lanhydrock as a recompense to the fishermen for several disastrous pilchard seasons. You can still see the old pilchard cellar and net store.

Poldhu Cove, also known as Black Pool Cove, is a lovely, west-facing sandy beach, suitable for building sand castles to beach volleyball, rocks to explore at low tide and great for swimming, surfing and windsurfing (in the designated zone). With the imposing former hotel on Poldhu Point to the south and the Mullion Golf course to the north, access to the flat, sandy beach is from the car park across the road. A few hundred metres along the southern cliff lies the monument to the great inventor Marconi who sent the first wireless signal.  Swimming and surfing is possible here taking care at low tide. Poldhu Cove is owned and looked after by the National Trust.

A site of archaeological importance surrounded by dunes, beaches, a medieval church and a reedbed rich in wildlife. The tiny church of St Wynwallow, with a detached tower set into the solid rock of the headland, is located to the north of the beach hence the name Church Cove.

Three glorious miles of sand and steeply shelving shingle run east from the historic harbour. When the tide is out, you can walk along to Loe Bar and the Penrose Estate from the granite pier of the harbour, accessed from the village. But please take note of the tides! Bathing is not advised as there are strong undercurrents here. Surfing, although popular, is only recommended to experienced surfers. 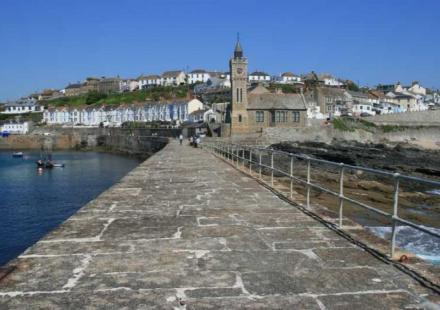